The crumbling concrete buildings, rusting metal posts and old gun emplacements around Loch Ewe are evidence of the vital role this area and its people played in the Arctic Convoys of World War Two. Explore some of Loch Ewe’s most important wartime sites by journeying along our the ‘Blazing a Wartime Trail Around Loch Ewe’ outdoor trail. Specially commissioned silhouette artworks, mosaics and interpretation bring to life the area’s remarkable wartime story. The Trail project has been made possible with The National Lottery Heritage Fund, with thanks to National Lottery players and with support from Highland Council. 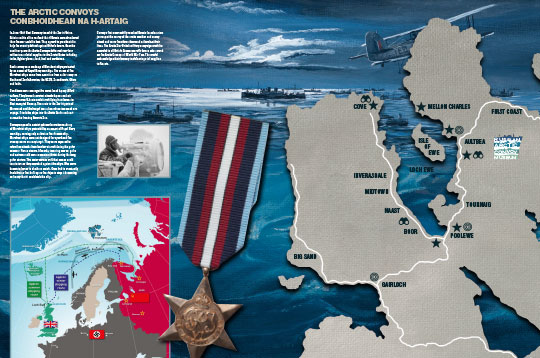 Between 1941 and 1945, Loch Ewe was the main strategic military base for the convoys. As a deep sea loch with direct access to the north Atlantic Ocean, it was a perfect location. At times up to ninety-five Merchant Navy and Royal Navy ships anchored in the loch.

The war transformed the local fishing and crofting communities around Loch Ewe. Both Loch Ewe and Gairloch were given ‘restricted area’ status and barrier checkpoints were erected at Gairloch and Laide. The Gairloch Hotel was taken over as a military hospital and local businesses and shops adapted to serve the growing population. Servicemen and women from around the world were based around Loch Ewe during the war. There were times during the war when military personnel outnumbered the local population by three to one.

Loch Ewe’s coastline bustled with action and activity around protecting the Convoy ships that gathered in the loch. Military personnel and local people manned lookout posts along the coastline to keep watch for enemy aircraft, submarines and ships. Barrage balloons protected the skies from German bomber attack. The remains of the building used for inflating the balloons and the brick water tower are visible beside the road between Tournaig and Poolewe. The panoramic viewpoints at Drumchork and Boor are ideal places to get a sense of the scale of the wartime operations.

The Boom Defence Depot at Mellon Charles supported a critical element of Loch Ewe’s wartime defences. It was built to maintain the anti-submarine nets that guarded the Arctic Convoy ships in Loch Ewe against submarine attack. Many local people took on important roles here assisting in laying and servicing the metal nets. Others worked in the NAAFIs along the coast, crewed naval support vessels or became mechanics and drivers.

Poolewe and Aultbea are Loch Ewe’s largest two communities and both played important wartime roles. Pool House on the shores of the loch at Poolewe was requisitioned during the war as Command Headquarters for the Russian Arctic Convoys and the Highland Field Training Regiment. Polish and Welsh army regiments were also stationed here. Aultbea was the main military operations base for the Arctic Convoys. Wooden dormitory huts, equipment stores, workshops, sick bay and offices were built to accommodate more than a thousand service personnel based here. The Community Hall with its distinctive curved roof is the only wartime structure that still stands in the village. It was built in 1941 as a cinema and became a social hub for both local people and military personnel.

The wild promontory at Rubha nan Sasan on the western tip of Loch Ewe was the area’s main wartime coast defence battery. It was a perfect location to watch for possible enemy attack and the structural elements that remain here are some of the most complete coastal defences in the United Kingdom. This is also the site of the Arctic Convoy memorial, unveiled by the Russian Convoy Club in September 1999.

Please respect the local communities that live around Loch Ewe. Many of our roads are single track, please drive carefully and use passing places with consideration. 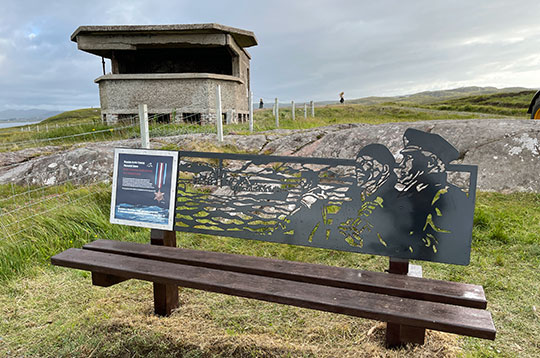