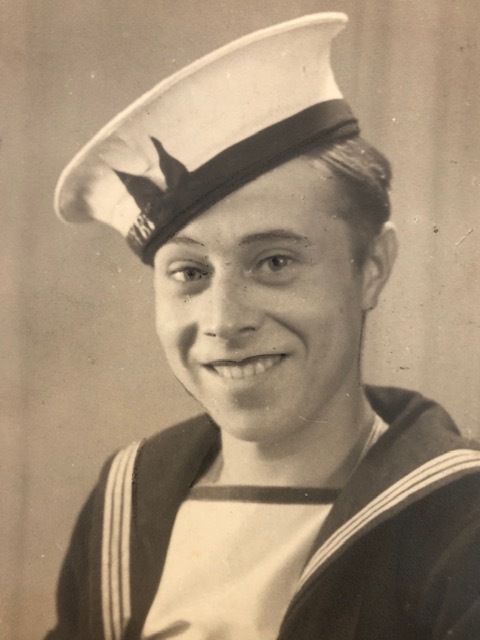 Born and raised in Stoke-on-Trent, Bill joined the Sea Cadets at an early age and this led to an aspiration to join the RN. Initially wanting to join the RN at 16, which coincided with the start of World War 2, his Father would not agree to sign the paperwork as he wanted Bill to wait until he was at least 18. Bill worked on the railways and finally joined the RN, as a joiner, on 10 Jun 1942.

It was during his time in HMS ZAMBESI that Bill saw action as part of the Arctic Convoys. From this period of service 2 incidents particularly remained with Bill throughout his life. The first was his involvement in Operation OPEN DOOR, the evacuation of 525 Norwegian civilians from the Norwegian island of Soroya in Feb 1944. He had a vivid memory of the evacuees appearing on skis, almost from no where once the 4 Z Class Destroyers were sighted. Second was the sinking of the US Freighter HENRY BACON, after her involvement in the evacuation of Soroya. The ZAMBESI was one of the first ships to go to the aid of survivors and Bill remembers trying to pull a US sailor from the water, but the sailor was so cold from the freezing water that he could not hold on to those trying to pull him out of the water and he tragically died.

At the end of World War 2, Bill had hoped to continue his career in the RN, but unfortunately the end of the war meant there was no permanent place in the RN for him. Bill was amongst the last of Armed Forces personnel to be demobilised, leaving the RN on 7 Dec 1946.

Following his return to civilian life, Bill returned to be a joiner on the railways predominately working on the Churnet Valley line in the Staffordshire Moorlands. He loved the scenery of the area so much that he moved his family to Kingsley, in the Staffordshire Moorlands, in 1962 where he became the Land Lord of The Plough Inn until 1988. The Plough Inn was then taken over by his daughter and her family, who ran it until 2003. Bill was also a very talented musician and singer, and played in many dance bands and regularly appeared at Trentham Gardens as part of The Ken Jones Band, working with of the big stars of the day such as Joe Loss and Jackie Trent (she of the Neighbours theme-tune fame). He continued to entertain customers at The Plough every Saturday and Sunday night right up until his death in 2003.

Like so many of his generation who saw action in World War 2, Bill did not talk about his experiences in the RN for many decades. It was only when his granddaughter, demonstrated an interest in the Armed Forces that he began to share stories about his time in the RN. From this he became involved with the Royal British Legion, The Russian Convoy Club and the Z Class Destroyers Association. Meeting up with so many former shipmates and reminiscing about his time in the RN came to mean a great deal to him and he was a regular attendee at reunions. He also enjoyed taking along his granddaughter to reunions, especially after she was commissioned as an officer in the RN. He was very proud to witness her Passing Out Parade at Dartmouth in 2002, and Lauren is disappointed that he never got the opportunity to visit her serving in a warship.

Bill was involved in the campaign for formal recognition of the contribution that the Arctic Convoys had made to the successful outcome of World War 2. He was great friends with Cdr Eddie Grenfell, who was the driving force behind the campaign, and they would often sing together at reunions. Unfortunately, Bill did not live long enough to see the retrospective award of the Arctic Star medal but his daughter applied for the medal on his behalf, and it was posthumously presented to his daughter and granddaughter by Cdre Graeme Little OBE ADC RN (NBC Devonport) in 2014.

Lt Cdr Lauren Johnson served in the Royal Navy for 16 years, transferred to the RNR in 2017 and is currently based at HMS VIVID.