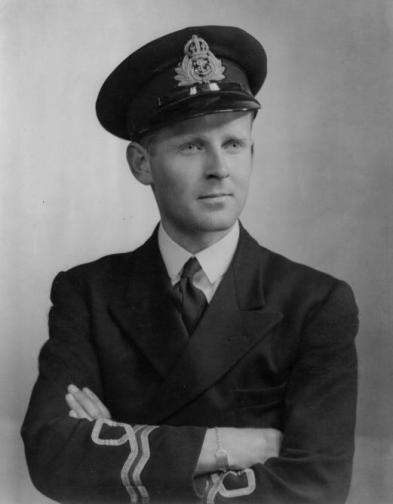 Douglas Johnston had been a doctor for two years when, aged twenty-five, he joined the RNVR at Devonport in June 1940 as a Surgeon-Lieutenant. He was to sail on five Russian Convoys. After shore postings he went to sea in July 1941 aboard the destroyer HMS Bulldog, which two months before had captured a U-boat in the Atlantic and salvaged its Enigma machine.

The first of his five Russian Convoys was PQ14 which sailed from Loch Ewe in late March 1942. On the return convoy QP11 the cruiser HMS Edinburgh was torpedoed on 30th April. This brought out three powerful German destroyers from the German-occupied Norwegian port of Kirkenes but, despite being more lightly armed, four of the convoy’s escorts, led by Bulldog, saw them off in five phases of action on 1st May and the convoy escaped unharmed. Bulldog suffered only splinter damage, but HMS Amazon was hit and suffered four dead and fourteen wounded. Pursued by the German destroyers HMS Edinburgh later sank, taking with her a cargo of gold bullion, Russian payment for war materials. Commander Maxwell Richmond, Bulldog’s skipper, was awarded the DSO for his leadership and courage in the defence of the convoy. Afterwards he wrote of Douglas “he has conducted himself entirely to my satisfaction. Has experience in action in which he displayed coolness and courage. Very keen on his professional work and a pleasant messmate.”

Douglas’s next convoy was PQ18/QP14 in September 1942. After the disaster of PQ17 the escort was significantly enlarged. An aircraft carrier was added and new aggressive anti-submarine tactics for the destroyers were introduced. This required a bigger fuel supply, however, and Bulldog and other escorts were ordered to leave PQ18 to cover a re-fuelling tanker which was to lie mid-way at Spitzbergen. They then joined up with the returning QP14 which reached Loch Ewe on 26th September.

Douglas’s other three Russian Convoys were with another destroyer, HMS Offa, which he joined in September 1944. These convoys were JW61/RA61 (October – November 1944), JW62/RA62 (November – December 1944) and JW66/RA66 (April – May 1945). Although the war was all but over, this last convoy proved to be busy for Douglas as a doctor. On the way to Russia with JW66 he diagnosed a case of acute appendicitis. He and the patient were transferred from Offa to the cruiser HMS Bellona where a successful operation was carried out. “This was good work as the sea was quite unpleasant enough for the Offa’s whaler,” wrote the Rear-Admiral commanding in his convoy report of 9th May 1945.

Apart from the ice, the wet, the cold, bad weather and the anxiety generated by the ever-present danger of U-boat and aircraft attack, Douglas’s memories of the Russian Convoys were dominated by the dreadful conditions and clinical practices that he and other RN doctors encountered at the hospitals at Murmansk. Lighter moments, though, included his job as ship’s censor (he had to read all outgoing mail: there was nothing he did not know about the crew’s private lives!) and the comradeship – he was a member of 1939-1945 Crews Association of HM ships Beagle, Boadicea and Bulldog until his death in 1982.