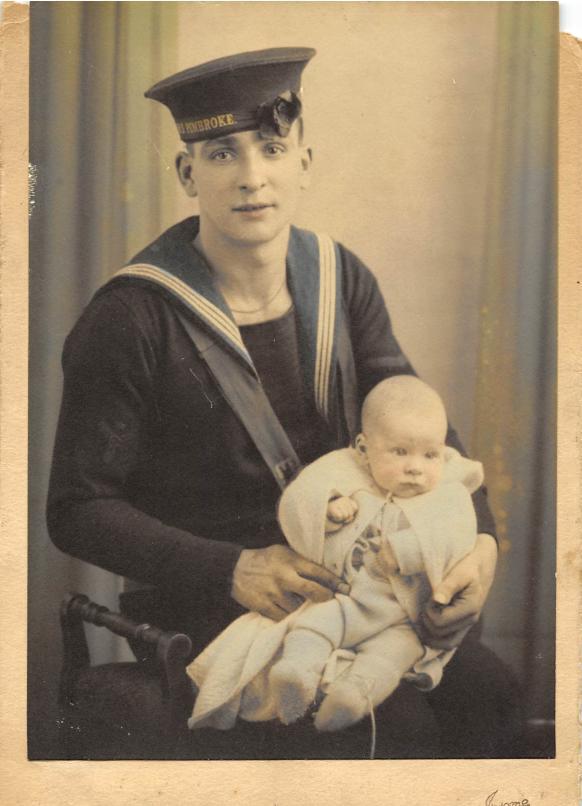 Edward Wylie was born in Glasgow on the 6th of January 1917, the eldest of 5.

He and his siblings had a hard and tough upbringing in the industrial area of St Rollox in Glasgow during the 1920’s, and an unstable family life resulted in 4 of the children being taken from their parents and boarded out to protect them.

Edward, the eldest of the Wylie Clan, spent some time at Longside, near Peterhead in the North East of Scotland along with his younger Brothers Sandy and James, and his Sister Jean.

Being from Glasgow made the family an easy target to get picked on from their local North East peers, but legend has it that young Edward was more than capable of standing up for himself and his siblings, and they soon settled in ok.

When he became old enough, i.e. aged 16, he moved back down to Glasgow and got himself a job as a Gardener.

Before the start of WW2, he served on both HMS Ramillies and HMS Warspite between 16th January 1937 and 9th September 1938.

When war broke out, Edward was deployed on HMS Vindictive between April 1940 and June 1940, where he was involved in operations in Norway.

In November 1940, he joined HMS Sherwood which was a US Navy ship that was taken to Portsmouth for Royal Navy modifications. Between January and February 1941, Sherwood was deployed for service with the 12th escort group based in Iceland.

On the 25th May 1941, Sherwood joined the Home Fleet ships during the search for the Bismarck, and ironically on the 28th of May 1941, it also assisted with the rescue of survivors from HMS Mashona which had been sunk by German air attack.

A lot of the very experienced Mashona survivors would soon be re-deployed on HMS Ashanti, Edward’s next ship which he joined on the 14th August 1941.

He spent from August 1941 till June 1943 on Ashanti, which some say was the most luckiest ship in the Royal Navy at that time.

With Ashanti, Edward was involved on many Arctic Convoys, where conditions were harsh taking into account the weather conditions and constant attacks from German aircraft and Submarine U-Boats.

June 1942 – Arctic Convoys PQ17 (Iceland to Archangel) and QP13 (North Russia to Reykjavik) Note: PQ17 was ordered by the Admiralty to scatter because of threat of attack by TIRPITZ

It was on QP14 where a famous incident occurred, called “The Long Tow”.

On the 20th September 1942, the convoy was returning from Russia when The Ashanti spotted a U-Boat on the surface a few miles away. She went into action stations and raced to the spot to fire depth charges.

Unfortunately, The U-boat vanished and they lost it. Ashanti returned to the convoy and instructed her sister ship HMS Somali to take her position in the convoy while Ashanti refuelled and reloaded more depth charges from a tanker in the convoy centre.

Within minutes of changing places the “luck of the Ashanti” becomes the ill-fortune of Somali.

Another U-boat attacked, hitting Somali and gravely wounding her. She had no power but did not look like sinking. Because of the exceptionally good weather, Ashanti’s captain decided to take her in tow.

Edward Wylie, along with Leading Seaman Leonard Payne, was handpicked by Lieutenant Terence Lewin to be part of a 3 man team who sailed between Ashanti and Somali in a small motorboat to try and supply an electric cable between the 2 ships in order to give Somali some power.

Lord Lewin of Greenwich, as he later became, remembered my Grandfather in his autobiography.

“The necessary length of cable was not available in one piece. Lengths had to be collected by the Lord Middleton from all the ships of the force: mostly the shore lighting cables that were carried as standard issue. At least six fifty-yard lengths were required, each connected to the next by what was hoped to be watertight jointing material. Then, for four hours, Lewin and the motorboat’s crew (56 years later he remembered their names: Leading Seaman Payne and ‘the absolute rascal’ Leading Stoker Wylie) painstakingly shackled the cable at ten-yard intervals along the length of the towing wire, working ‘often with arms up to the shoulder in water at 32 degrees Fahrenheit, with hands that soon became bruised and bleeding’. Finally, the cable end was hauled on board Somali, connected up and switched on.”

With great difficulty, Ashanti took Somali in tow. For more than six hundred kilometres they inched their way towards the relative safety of Iceland.

Unfortunately, on the night of the 24th September, with Iceland almost in sight, disaster struck. The weather that had been so calm over the last few days turned against them and within minutes the sea had risen to ten-metre waves, and a severe gale roared out of the darkness bringing blinding snow.

Somali could take no more, her fractured hull was finally torn in half and she began to sink rapidly. The eighty men left aboard had no option but to jump into the violent icy seas. Forty of the men did not survive.

As well as doing numerous Arctic Convoy’s, Edward’s other adventures on board HMS Ashanti were varied and interesting:

26th Dec 41 – A German trawler, GEIER, was boarded by The Ashanti (Possibly Enigma Machine on board) The Ashanti boarding party apparently ate the Germans Xmas dinner!

August 1942 – Operation PEDESTAL (Malta Convoys) where The Ashanti Came under sustained air and submarine attacks. On the 13th Aug 1942, a near miss from an air attack caused a boiler room fire. As a stoker, that would have been his workplace!

November 1942 – Operation TORCH (Support for the assault on Algiers)

In June 1943, Ashanti’s exploits had took their toll, and she had to go back to Britain for a major refit.

It was after this that Edward joined HMS Kent, and a continuation of his Arctic Convoys. His major events on Kent were:

5th September 1944 – Deployed as escort for RMS QUEEN MARY with HMS DEVONSHIRE and HMS BERWICK during passage in Atlantic (Note: RMS QUEEN MARY was taking the Prime Minister to attend the OCTAGON conference with the US President.)

After HMS Kent, Edward had a relatively quiet time at Pembroke, Flamborough Head and finally ending his Royal Navy career in May 1947 at HMS Cochrane in Rosyth.

I knew him for 18 years until he passed away in January 1980. He never spoke about the war, but we knew he had been awarded a medal by the King. A while after he died, I asked my Father about the medal. He didn’t know much about what it was awarded for, but thought it was for trying to save people on a sinking ship. I now know now that the medal was for helping to supply HMS Somali with power, but sometimes wonder if my Grandfather still had vivid memories of that night when the Somali sunk, and the Ashanti crew were clinging to the side nets desperately trying in vain to grab hold of anyone slipping by. It must have been horrendous to witness.

Soon after the war, Edward sold the medal. I traced it not long ago and found that it had been sold again at auction in 1995 for £280. I would love to know who has it now, just to have one look at it.

I asked Tim, Lord Lewin’s son, if he knew what this meant.

“My father picked your grandfather and “Whacker” Payne personally for being both good and resourceful seamen, but he chose them as men he knew could give their all to the end if necessary. Remember this was a small ship so they all knew each other closely. He was known as an absolute rascal mainly because of his sense of humour, and telling of jokes and tall tales. Despite his penchant for mischief he was clearly and evidently one of the most reliable seamen when the chips were down.”

I donated a portrait of my Grandfather to the museum a few years ago. It shows him in Navy uniform with “Ashanti” written on the cap, and holding my Father as a baby.

The portrait was originally thought to be late Dec 1942 or early 1943, as that was when he was awarded the DSM, but the mystery was that my Dad was born in Aug 1939, which would make him at the time of the portrait between 3 and 4 years old.

My sister came across the original photograph (see above) that the painting was based on, and it solved the mystery.

The Photograph was actually taken on Armistice Day 11th Nov 1939, so I’m presuming my Grandfather was probably at a remembrance service when it was taken, and that would make my dad nearly 3 months old. You see it says “Pembroke” on the cap.

When he had the portrait done, I think he was minded to have “Ashanti” put on it in remembrance of his service on HMS Ashanti.

The portrait is now on display at the Russian Arctic Convoy Museum in Aultbea.