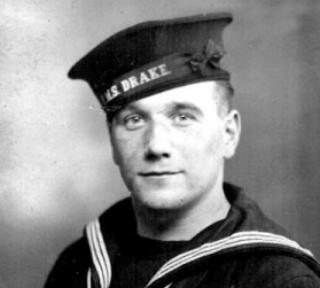 Enos (Eddie Fellows) was registered in February 1939-for six months conscription, at the age of nineteen.

He received his calling-up papers on sixth November 1939, and reported to Butlins Skegness on seventh November 1939 – It had been renamed H.M.S. Royal Arthur by the Royal Navy, as a training centre.

He had three weeks with only part of his kit-bits of Navy uniform. Then he was drafted to H.M.S. Drake at Devonport (Plymouth) where after one month’s kitting up and training, he was passed out as ˜Ordinary Seaman”. He was granted one week’s leave, then was back at Devonport for two week’s gun training and “square bashing”. On the twenty-third of January 1940 he was passed out as a gunner.

Enos was with 129 others and they found themselves on draft to their first ship, the H.M.S. Carinthia. This had been a 21 thousand ton luxury liner in peacetime, which had been taken over by the Royal Navy A.M.C. Some of the Cunard crew, including the captain officers and chef, were still on board- just the swimming pools were closed!

This was the first time at sea for most of the H.Os (6). It turned out to be an experience he describes as ‘not frightening, but a taste of what a “sailor’s life” was to be- as if outside the war’. For example, “holystoning” (rubbing down) wooden decks in bare feet, in Arctic conditions. Their relief ship, H.M.S. Caledonia, later joined them to head home, which was docked on the River Clyde. There, their ship was fitted with two 4″ guns and one ” gun. The cabins and certain other parts of the ship were closed to R.N. seamen.

Gerry Brewis has kindly allowed us to include a downloadable pdf of his biography of Enos Fellows. He has also compiled Enos’s photos and recollections, which are also available to view and download.