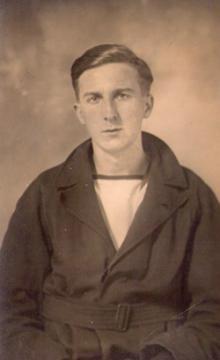 Eric was born at Harborne in Warwickshire, a few miles south of Birmingham, on the 6 August 1918 and lived there all his life apart from his wartime service in the Royal Navy. He volunteered for the Royal Navy on the 28 September 1938 during the Munich crisis “for the period of hostilities”.

The crisis over he trained as a Wireless Telegraphy Operator and was posted to HMS Venomous at Rosyth on the 31 July 1939, the same day as Lt Cdr Donald G.F.W. McIntyre RN took command. In early August McIntyre took Venomous into the Firth of Forth for “sea trials and exercises” with the 16th Destroyer Flotilla. Eric Pountney hurriedly photographed the Forth Bridge before they “cleared the decks” to return to harbour and was photographed with the name of HMS Venomous on his cap ribbon. Once war was declared only the initials HMS were given on cap ribbons.

Photos : Leading Telegraphist (note arm badges) Eric Pountney on duty in the W/T Office on HMS Venomous and the Mess Deck where telegraphists and coders spent their leisure time between watches relaxing, eating and sleeping. The cards, sweets, fruit and bottles of beer suggest they are celebrating a birthday.