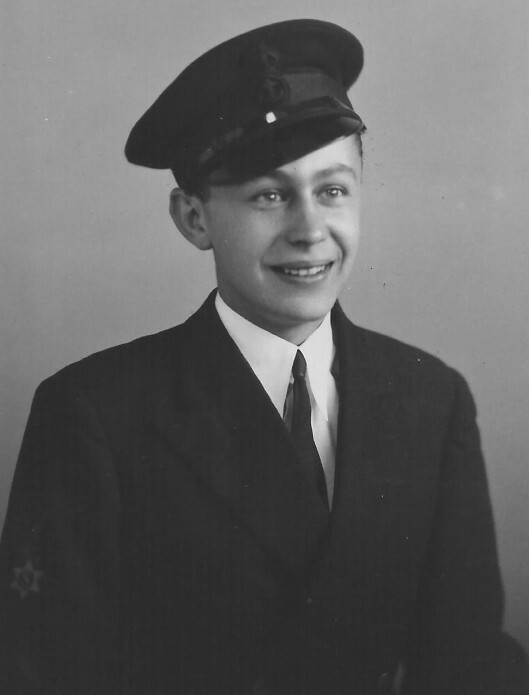 Ernest “Jim” Sidders turned 18 on 24th August 1939, and immediately registered to join the Royal Navy. War was declared on the 3rd September, and four days later Jim reported to HMS Pembroke to start his training.

Originally hoping to be a submariner, he served aboard the supply vessel HMS Titania before joining the newly commissioned Flower Class corvette HMS Honeysuckle as Leading Supply Assistant, or “Jack Dusty”.

Jim served aboard the Honeysuckle for the remainder of the war, seeing action on a number of Russian convoys, as well as North Atlantic and Mediterranean (Malta) convoys, and the D-Day landings.

Of his time on the Russian convoys, his reminiscences were restricted to being constantly wet and very cold, being unable to shave, the need to knock ice off the superstructure to prevent the ship from rolling over, and the risk of being swept overboard. He thought the Russian people treated the visiting crews very well, providing cinema shows and other entertainment. However, he wasn’t so impressed with navy vessels not being allowed to moor alongside the dock. Instead, they had to bounce around at anchor for days on end whilst the return trip was organised. These feelings would not have been helped by the fact that he “celebrated” Christmas Day for two consecutive years, on a wintery Russian harbour.

HMS Honeysuckle was, said Jim, “one of the luckiest ships afloat”. When asked if he’d seen “real shooting action” his stock reply was that “when the ship’s company was called to action stations, my first task was to head for the galley and make some sandwiches”. He did admit to seeing something of the sinking of the Scharnhorst, though it was from a “safe” distance and restricted to the flashes of shells as they hit the German Battleship.

Jim was never one to talk much about his wartime experiences. He once reluctantly took the family to see the film “The Longest Day”, and only many years later did we find out that he was there sitting off Sword beach. Later he told a reporter from a local newspaper that “We were engaged before D-Day in the Channel looking for trouble, and of course we didn’t find it”.

He remained in the Royal Navy until medically discharged in 1950.