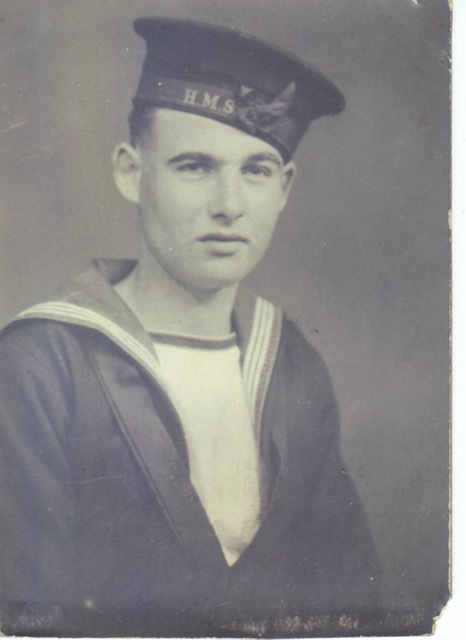 My father Frank W Bealey was born in 1922 in Bilston, West Midlands, and volunteered for the Navy in September 1941. He spent 12 weeks at HMS Collingwood doing basic training, and he described this as being over crowded and awful. His first ship was HMS Marsdale where he spent long periods at sea (up to 7 weeks) going to South America and Africa. His second ship was HMS Rockingham from which he experienced the N Atlantic convoys, one route was from Derry to Halifax in Nova Scotia and another was from Derry to St Johns Newfoundland.

In August 1942 he joined his third ship – HMS Marne at Scapa Flow and in September 1942 he undertook his first Arctic Convoy PQ18, which left from Loch Ewe on September 2nd 1942 and returned as QP14 at the end of September 1942.

In November 1942, during preparations for Operation Torch, the Marne was torpedoed off the coast of N Africa and he was lucky to survive this. He then spent 3 months in Gibraltar waiting to join his next ship.

He joined his fourth ship HMS Minna in January 1943. This was based in Algiers and it was tasked with Coast Watch Enforcement, which involved picking up Resistance Movement Landing Agents and dropping them off in Spain or Vichy France or Corsica.

He did his ASDIC training in Dunoon and Campbeltown, and then joining his fifth and last ship HMS Tortola in May 1944 in New Port Rhode Island and on this he experienced two more Arctic Convoy trips departing from Loch Ewe JW62 and RA62 in late November/December 1944.

He was demobbed on the 14th January 1946 at Redford Barracks in Edinburgh. And five days later he arrived at the London School of Economics to study Political Science. A grateful country paid for the cost of his university education.

After LSE he remained in academic life teaching at Keele University in the 1950s and early 1960s, and met and married my mother. They moved to Aberdeen in 1964 where my father took up the role of the first Professor of Politics at Aberdeen University where he held this post for many years, enjoying a very happy family and successful professional working life.

My father never really spoke about his experiences in the Navy, least of all the Arctic Convoys. Except he did have a few things he occasionally mentioned, and which allowed us a small window into his war life.

He did not like the Northern Lights, which he said scared him, but now I think I understand why – because it meant they were near to danger when they saw them, being so far North and I assume more visible and prone to attack by U boats?

He did not like Orkney, and he was also very negative about Gibraltar. All these things he never explained why. It was only after he died and I read his letters that I realised he had likely been traumatised by these experiences and particularly the torpedoing and then also the delay in drafting him onto a new ship meant he was restless and bored on Gibraltar for many weeks.

He did reflect about some of the coincidences of the Navy and his future life – particularly he remarked on the time he spent in Scotland during WW2 while he was in the Navy, never imagining that he would return in the 1960s to spend the rest of his life so happily there.

He did admit that the Navy had a lasting legacy on his life, and he once said that towards the end of the war ‘below decks political debates raged. The general feeling was ‘We’re not going back to that again’. So his Navy war experience certainly made him very politically engaged and paved the way for his career path.

Attachments – Letter and The Buzz

The attached are as follows:

1. Attached letter to his mother was written just after this first convoy experience, on the 14th October 1942. The Marne was by then back at Scapa Flow in Orkney. Of course there is no mention about what he has just been through as this was not allowed. The letter is interesting in that it mentions the awards for the Captain and Officers for the recent action in which the Marne took part which I assume might be the PQ17. He also mentions the ship’s magazine – which I attach a pdf of here – we still have the original.  I think there are some pages missing at the end.

2. The Buzz Magazine pdf circa August 1942 Round the Mess Decks page gives all the recent decorations and lists of the names who were awarded. OS Flanders is mentioned as contributing to the cartoons  (this is Michael Flanders of Flanders and Swann) and this is also mentioned by my father in his letter –‘two professional actors’. The Buzz articles are fascinating insights into navy life, and to the reader in the 21st century might seem a bit inappropriate, but this is how it was and that in itself is interesting. The Narvik piece seems to be relating April 1940 and the sinking of HMS Hardy near Narvik. There is another piece about life in the Soviet Navy.

4. Frank at HMS Collingwood. This would be after the first few weeks of his training so taken in September 1941. He is the very detached and slightly uncomfortable looking lad at the very far right end of the front row sitting very upright.