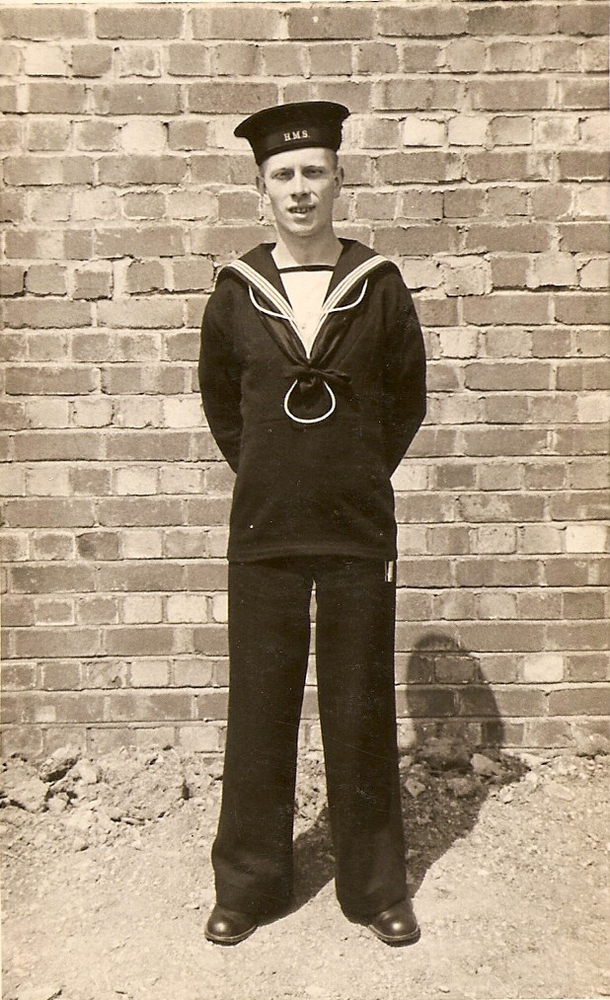 Frederick Robert Johnson, was born in Fulham, London on 28th August 1919, just nine months and 17 days after the Armistice which ended the First World War. At the age of 20 he was called up for service in the Royal Navy Volunteer Reserve (RNVR) to play his part in the Second World War.

On 22nd May 1940 Fred reported for basic training in HMS Raleigh at Torpoint, Cornwall as an Ordinary Seaman. In August he was sent to Scotland for specialist anti-submarine warfare training on the underwater detection device known as ASDIC (standing for Anti-Submarine Detection Investigation Committee) or, by the Americans, as SONAR. His training started at a secret shore establishment (HMS Nimrod) located in the original Campbeltown Grammar School on the Mull of Kintyre in Argyll. He was promoted to Able Seaman in March 1941 and, later that year, moved to another secret base (HMS Osprey) within the requisitioned buildings of the West of Scotland Convalescent Homes in Dunoon, also Argyll.

It was not until April 1942 that Fred joined his first operational Royal Navy ship, HMS Erne, a Sloop of the Black Swan Class, under the command of Lieutenant Commander EDJ Abbot RN. The ship had been built in Belfast but sustained major damage from an air raid that delayed her entry into service. She was repaired at a shipyard on the River Tyne, where Fred joined the ship for sea trials. On 31st July 1942 HMS Erne saw action while on convoy escort duty in the North Atlantic, east of the Azores. In company with two other Sloops (HMS Rochester and HMS Sandwich) HMS Erne fired depth charges (known as Squid), which sank the attacking German Navy submarine (U-boat ), U-213; all (50) hands perished.

While serving in HMS Erne he visited many places, including Freetown (Sierra Leone) on the West coast of Africa and Gibraltar. He took part in Operation ‘TORCH’, the allied landings in North Africa, to retake control from the Vichy French Government. His ship visited Oran and Algiers (both in Algeria) and Tripoli (Libya).

He later took part in Operation ‘HUSKY’, allied landings on Sicily against the Axis forces of Italy and Germany, which marked the start of the Allies’ assault on German-occupied Europe.

For his part in helping to locate and attack the submarine Fred was awarded the Distinguished Service Medal (DSM). He received the decoration from HM King George VI at Buckingham Palace on 28th March 1944, watched by his mother and his sister. By that time he had been commissioned in the RNVR. He had attended officer training in HMS King Alfred, a shore establishment, sited at Hove in Sussex, part of which was located in Lancing College. He completed his officer training at the Royal Naval College, Greenwich and was ‘dined-out’ of the Mess in the famous ‘Painted Hall’ designed by Sir Christopher Wren and Nicholas Hawksmoor. In January 1944 Fred was promoted to Temporary Acting Sub Lieutenant in the RNVR and then, in March, he returned briefly to HMS Nimrod (Campbeltown) for the Anti-Submarine Control Officers Course.

His first commissioned posting was to HMS Bamborough Castle, a Castle Class Frigate (or Corvette), as Anti-Submarine Control Officer. The Commanding Officer (CO) was Lieutenant Commander Magnus Spence Work DSC* RNR, from Kirkwall, Orkney. Fred joined the ship at the ‘builders’ in Aberdeen, North East Scotland, and took part in sea trials before the ship repositioned to Tobermory, Isle of Mull. This would have been just about the time of the D-Day landings in France.

From Tobermory HMS Bamborough Castle was deployed in the North West Approaches, a region covering the sea area north of Ireland and west and north of Scotland, for the defence of merchant ship convoys crossing the North Atlantic. Fred was now in command of the team of ASDIC operators, the job he knew well from his time in HMS Erne, responsible for detecting and precisely locating enemy submarines, which posed a huge threat to the naval and merchant ships that formed the convoy.

Soon, though, HMS Bamborough Castle was reassigned as an escort to Russian Arctic convoys, taking all manner of equipment and other supplies from Britain to Northern Russia. The convoys formed up in Loch Ewe on the North West coast of Scotland. They sailed up the coast of Norway and around the North Cape to the Kola Inlet, near Murmansk, in Arctic Northern Russia. Between September 1944 and May 1945 HMS Bamborough Castle took part as escort in six convoys making the hazardous round trip, each lasting around 20 days. As well as the constant threat of attack from enemy submarines and aircraft, the convoys operated in atrocious weather conditions, and had to cope with severe ice that built up on the superstructure of ships during the cold and dark winter months. Had the sailors not worked continually to chip off the ice from railings, decks, walkways and other equipment, the ship might have become top heavy and turned over, dropping the crew into freezing cold and mountainous seas.

On 9th December 1944 HMS Bamborough Castle located and depth-charged U-467, a German submarine, in the Barents Sea off Murmansk; all 51 hands were lost. In February 1945, HMS Bamborough Castle, with HMS Lark, a Sloop, carried out an Anti-Submarine search in the Barents Sea outside the Kola Inlet. In this operation another German submarine (U-425) was attacked and sank with one survivor from the U-boat’s company (52 hands lost). “For gallant service, endurance and devotion to duty while serving in HMS Bamborough Castle in Arctic seas while escorting convoys to and from North Russia”, Fred was awarded the Distinguished Service Cross (DSC). His CO was awarded a second bar to his DSC, meaning that he had three times been decorated with this award for gallantry.

He met his wife (Miss Eva Joan Elizabeth Rose) as a result of her knitting ‘comforts’ for the Royal Navy. Fred received a parcel and a letter from her and replied with a thank you letter in August 1940. She lived in Putney, just across the River Thames from Fulham, and worked in the Civil Service. They wrote to each other and first met when Fred had a brief period of shore leave. Five years later, and engaged to be married, she attended the investiture by HM King George VI at Holyrood Palace in Edinburgh. They married in June 1946.

Fred left HMS Bamborough Castle on posting to HMS Loch Tralaig on 9th May 1945, immediately after VE-Day, signalling the end of the War in Europe. Once again he served under Lieutenant Commander Magnus Work. He was promoted to lieutenant in October 1945 and was discharged from active service on 6th June 1946, the second anniversary of D-Day. He remained lifelong friends with his old Captain.