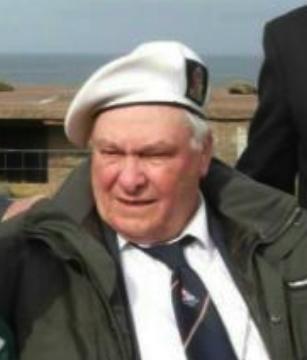 Geoff Holmes was born in Doncaster and could have spent the war in relative safety working down the pits as a Bevan Boy, but he made a deliberate decision to exchange ages with a cousin who had lost a brother on HMS Hood (which was sunk by the Bismarck).

No-one questioned Geoff about his age (then fifteen) although someone remarked he looked a bit on the young side for seventeen. Geoff signed up for the Merchant Navy. He served on the Samaritan and Fort Yukon and made trips to the US and Canada.

Geoff’s first Arctic convoy came in November 1943 when they joined convoy JW54a and formed up off Loch Ewe, setting sail soon after for Murmansk.

Geoff recalls: “All the Arctic convoys were in winter because it was dark most of the time. If we had gone in summer we would have been exposed to the Germans for almost 24 hours a day. However, we were attacked by Heinkel and Dornier bombers but thankfully they all missed. The planes came so low that you could see the faces of the crew and even see that they were wearing oxygen masks. My ship was lucky but we lost a number of others along the way.”

Many sailors found the bitter cold as bad as the enemy raids. Says Geoff: “The ice was several inches thick and the fog came in so thick that at times you couldn’t see another crewman a few yards away. The worst thing was that you knew the enemy was out there waiting to get you.”

Eventually they reached Murmansk which had been devastated by almost constant aerial bombing. Geoff added: “I lost some good friends. You tried not to get too close to people because there was a fair chance you wouldn’t see some of them again.” Geoff survived three Arctic convoys and remained in the Merchant Navy until 1951.