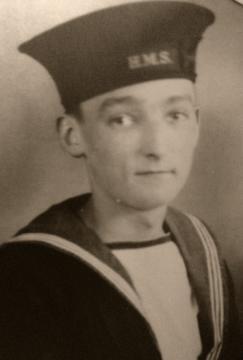 Information & photos provided by George and his Family. Edited by Leona Thomas.

George Edward Hollingworth was born on 11 May 1925, the seventh child of a Rochdale farming family. George was the first of 4 brothers to go to war, the rest were exempted from service having agricultural worker status.

At 18 George joined the Royal Navy on 10 November 1943. After 10 weeks training at HMS Raleigh, Torpoint, Cornwall he was transferred to duties on defensively equipped Merchant ships.

After being involved in the repatriation of 2300 women and children from Britain back to Gibraltar, in May 1944 George was posted to the merchant ship Luculus. It had just returned from the Russian convoys JW59 and RA59A.

George recalls: “It was an oil tanker so had a role refueling Naval ships (some of the escort vessels could only do 72 hours before they needed to be refueled). It had 4 Royal Navy guns crews put on and 3 Maritime gunners (Army). It took a load of oil to Gosforth on the south coast, dragging a barrage balloon behind it in order to deal with doodle bugs. In Salford docks it was refitted for Arctic conditions. Cork linings were put in cabins and asbestos rope lagging was placed round pipe lines for insulation purposes.”

“From Salford, Luculus went up Clyde loaded up with oil and we spent time training Russian seamen on how to refuel at sea. They were based on small ships the British had handed over to Russia. We left for Loch Ewe on convoy JW62 on 29 Nov 1944 to Murmansk. We were approx 5 columns of ships and about 40 or 50 ships in total. Returning from Murmansk with another convoy, (RA62), the weather was really rough. We were excused watches for 2 days and were flooded out of our accommodation which was under the bridge on deck level.’

When returning from Murmansk with a faulty engine and in extremely rough weather Luculus was lagging behind the convoy with another ship. It was rounded on by a destroyer which, using a loudhailer system, shouted out, “Try and keep up with your column you are causing anxiety!”

From there, George served on a selection of merchant ships going to warmer places such as Calcutta and Vishakhapatnam in India, Rangoon in Burma, Malaya, Colombo and Trincomalee in Sri Lanka then Bombay.

The end of the war came when George was between Ceylon and Malaya on their way to reoccupy Singapore. He was eventually released to resume his farming duties and demobbed on 12 May 1946.

Postscript from George’s daughter: “Just a few months ago George was watching a documentary about the Arctic Convoys and it showed the ships company of HMS Bluebell sunk with 80 crew dead and only one survivor. At 87 Dad was sitting at home and recognized 3 or 4 of the lads that had died. They had been with Dad on joining up at HMS Raleigh and are present on the group photograph. A reminder that after having a full and happy life many of the men involved in these wartime adventures weren’t so lucky.”