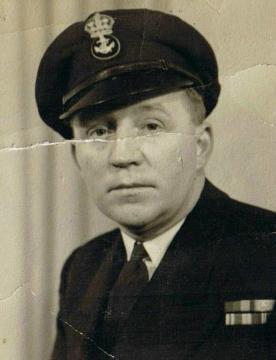 Actually my memories of the convoys are getting dim, what does stick in my mind though, are the memories of the bitter cold, darkness and mountainous seas. Of course, as well as being close up on watch or at action stations, we did get a break now and again, which relieved the stress a little and gave chance for pastimes all be it uncomfortable though it was not being able to sling our hammocks, or have a loose blanket because of damage control. I for one used to pull my long johns free of wool for they were arctic issue and consisted of pure wool. I dyed the wool with condies crystals or green veg dye, and make rugs, slippers, soft toys etc or do tapestries, others would get their heads down where possible or play uckers (ludo) which was very popular game in the Navy.

There was one convoy I remember quite well, I think it was our last or next to the last. As far as convoys went it wasn’t too bad except for rough seas and cold winds, for it was nearing the end of the war, or so we thought but we wouldn’t have been so placid if we’d known what was coming.

On reaching Scapa, all of us off watch were getting ready for shore, a pint and a meal at NAAFI would be a nice break but, no hands to sea station came over the tannoy, we all moaned and wondered what was happening. On leaving harbour we soon found out. The captain cleared lower deck and told us that three German destroyers had been trying to find our convoy, missed it and our Admiral had been ordered to intercept those. We succeeded just off the coast of Norway where a battle was fought in which they took quite a lot of damage but escaped up a fjord. Whilst we were being fired on by shores batteries, we received slight damage but sadly one rating killed and three others injured.

It was a quiet journey back except for sighting three German aircraft but no action took place. Later we were sent to dock for repairs in Hepburn on Tyne getting a well earned rest!