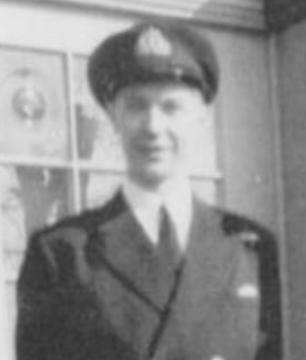 Information and photos by Dale Minks. Edited by Leona Thomas.

Gordon Grayson, a native of Sheffield, studied at Cambridge University from where he joined the Royal Navy at HMS Ganges near Harwich in June 1943 and served for about 3 years.

First he was posted to an anti-submarine sloop, HMS Woodpecker. His first voyage was very successful as six submarines were sunk including U202, U119, U449, U504. They picked up a lot of survivors including those of U462 which had been sunk by aircraft. After a period of leave most of the crew of HMS Woodpecker was transferred to a new-build, HMS Lark, where he served as an ASDIC officer. Gordon sailed on his first of four convoys in October 1944.Gordon says: “These were winter convoys so they had to sail closer to the Norwegian coast due to the ice floes (so were more vulnerable to attack than in summer). It was very cold, so heavy clothing was needed especially for standing outside for four hours on an open deck. The first 3 convoys were fairly uneventful. But on the final convoy there was quite a pack of U Boats awaiting the convoy outside the Kola inlet. It was a right old battle. One of the escorts, HMS Bluebell, was within sight of HMS Lark and was torpedoed by U711.

It must have been a direct hit to its magazine as the whole vessel blew up and disintegrated. It completely disappeared. There were only 12 survivors. The night before, HMS Lark had been out on patrol and sank U425. The following morning, at first light, a life raft was spotted and it was found to contain 4 German sailors all frozen solid. More than 15 minutes in the sea (even in a raft) led to death. The saying was that drinking a lot of gin helped!”

On 17th February 1945, during preliminary assembly of convoy, HMS Lark was hit by torpedo fired by U968 in the Kola Inlet. The acoustic homing torpedo hit the stern, which was wrecked, and the vessel had to be abandoned. Survivors were rescued by other escorts.

Gordon added: “The worse the weather was, the more difficult it was to be attacked by air or sea. The whole deck was covered in ice which every so often had to be chipped off by a working party to prevent the ship becoming top heavy and capsizing.”