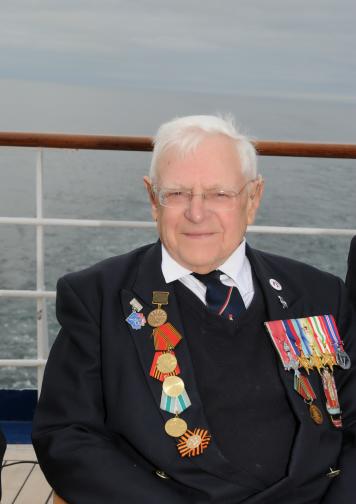 I was lucky to have spent with Gordon Long a lot of time on board the ship “Quest for Adventure” when we were on a tour in the Nowegian sea and then the Barentz and the White seas. We talked a lot with him and all the passengers were willing to communicate with him.

We will always be grateful to him for initiating several tours of the British and American veterans to the Russian North starting from 2005. Gordon aspired for the reunion with the Russian citizens and did a lot for the establishment of the friendly relationships with the local people of Northern Russia.

During their tours Gordon and the veterans were visiting the military cemeteries in Murmansk and Archangel, paying homage to their former shipmates buried there during World War II. So it became a matter of prime importance for Gordon and other veterans.

Gordon was a very optimistic and cheerful veteran whom we liked very much from the very beginning when he and other veterans came to Archangel and our university in 2010 specially for the V-Day celebrations in Russia. We will always remember him and feel appreciative that we knew this honourable veteran.

Gordon passed away peacefully on 8th December 2014 in Southend Hospital.