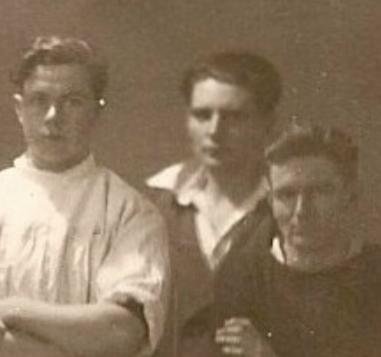 My father, Ian Tolhurst, served aboard HMS Achates and was aboard her when she was sunk on Russian Convoy duty. He was one of a relatively small number of survivors. Although he passed away last year (2012, aged 88), my mother has his account of these events and some photographs and other documents relating to it.

We have located the photograph of survivors of Achates in hospital in Russia (below). My father is in the back row standing second from the right hand end next to a member of the medical staff. This was his first mission having volunteered to join the Navy.

He has written on the back of the photo: “In North Russian Hospital January 1943”. We do not know who took the photograph. We understand that at least two of those in the photograph (probably amongst those in bed), subsequently died of their wounds and/or pneumonia. We can’t identify any other personnel in the photograph.

My father was operated on in this hospital to remove shrapnel. We understood from him that this had to be done without anesthetic as it was not available.