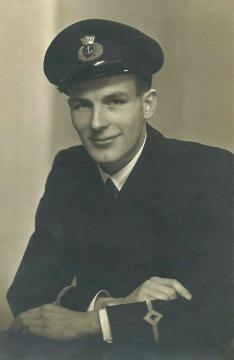 In January 1939 Ivan joined the B & S Shipping Company of Cardiff (later known as the South American Saint Line) as a sixteen year old apprentice deck officer. He made seven voyages to the east coast of South America on the SS St. Merriel before joining the SS St. Clears on the River Tyne in November 1941.

At North Shields they loaded war materials and sailed for Iceland. Here they formed up with four other British and two Russian merchant ships as convoy PQ5 with a Royal Navy escort of three or four small minesweepers, two destroyers and the cruiser Sheffield. The convoy sailed north eastwards in the increasing cold and overcast, relying on the Royal Navy for navigation. Although continuously tracked by German reconnaissance aircraft they were not attacked and at the entrance to the White Sea the Royal Navy escort left them in the charge of two Russian icebreakers which smashed a passage through the ice until they were able to dock at Bakaritza, on the opposite bank of the River Dvina to Archangel.

After the cargo was unloaded they became frozen in with two other British ships for the duration of the Russian winter.

It was not until May 1942 that the ice on the Dvina began to break up. They eventually crossed the river to load a full cargo of timber and at the end of June they were finally able to leave, picking up a contingent from Murmansk so that 35 ships formed up as convoy QP13 for the return voyage.

On July 2nd they passed the ill-fated outward-bound convoy PQ17. Says Ivan: “Blohm und Voss found us both but the Germans concentrated on the potentially more rewarding target of the outward bound convoy.”

On July 2nd convoy QP13 divided off Iceland, Ivan’s being one of 16 ships which turned south for Loch Ewe. “Loch Ewe was a wonderful sight”, he says.

The other 19 ships rounded Iceland heading for Reykjavik but lost position in bad weather and ran into a minefield. Five were sunk and one damaged.

Released from his indentures, Ivan gained the Second Mate’s Certificate and in June 1942 Joined the SS Fort a la Corne carrying war materials to North Africa. On the second voyage they were torpedoed in the Mediterranean but with no loss of life. Thence followed other ships and invasions in Sicily, Salerno and to Bari in Italy, and the south of France.

With the end of the war Ivan retired from the Merchant Service and became a teacher. He has recounted his wartime experiences in the Merchant Navy in the book “Christmas in Archangel”.

Ivan’s book is available to buy from our museum shop