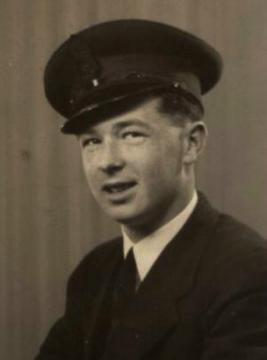 Information and photo by James Brown. Edited by Leona Thomas

James registered for service in the Royal Navy in October 1942, after his 18th birthday. He was sent for training at a school for Supply Branch ratings and Writers in Highgate, London. Completing this course he became Supply Assistant and he had to report to Portsmouth. He was told to check the noticeboard each day for his posting. A day or two later the board had a notice that he and another were to report to Berwick.

Says James: “Great, we thought, home at weekends, me to Kelso and he to Newcastle!! We were handed our transit papers and glory be! – it was HMS Berwick!”

He joined HMS Berwick in August 1943. It was a three-funneled County Class Cruiser, which was supposed to be at Scapa Flow, but was actually in for a re-fit at Rosyth.

James recalls: “We arrived the following afternoon after lunch and the CPO Cook fixed us up with a big fry-up on the mess deck. We ate up and sat back and lit up our ˜ciggies” and thought ˜this was the life”. Then all hell broke loose, we shouldn’t have been smoking at that time of the day. This charming gentleman, the QM very politely brought this to our attention and threatened us with Captain’s Orders the following morning! That was my first introduction to life on the Berwick!”

“I was allocated an Action Station in one of the cordite handling compartments for the 8″ guns. This was down in the bowels of the ship. When all watertight doors and hatches were closed it was, at times, rather scary. Being down in the depths I never really knew was happening. I can’t say I saw a lot of action, but I heard plenty!”

Apart from the Murmansk escort duties, the Berwick was on one occasion, used to transport army personnel, food and equipment to Spitzbergen. Another trip involved escorting the Queen Mary with Winston Churchill on board to Halifax, Nova Scotia for a meeting with the US President in September 1944.

“Two trips to Loch Ewe, and also one out of Loch Erribol, created diversions for us. Some of us were allowed to go ashore to attend a dance at Aultbea on one occasion.”

James was demobbed on 14th November 1946 after having completed a trip to Colombo and similar trips to Sydney, Australia. He recalls “these were much more pleasant than the extreme cold of the Arctic!”