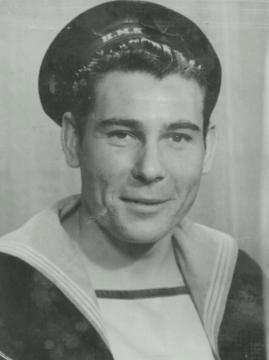 I volunteered for the Royal Navy, aged 17, on 10th November 1943. Being born and brought up in the fishing village of Carsethorn, near Kirkbean, on the Solway coast of Scotland it was a natural choice. I did my basic training as an ordinary seaman at HMS Raleigh in Devonport from November 43 until Jan 1944 then spent two months on HMS Valkyrie in the Isle of Man, training as a radar operator, cutting edge technology of its day.

My next exciting naval experience in early May 1944, as an 18 year old AB seaman, was to cross the Atlantic to New York on the Queen Elizabeth liner, by then converted to war service. My family asked recently if the QE had been escorted by a convoy. I had to laugh, for she didn’t need a convoy! She was so fast nothing could catch her! On this voyage I was thrilled to meet and get the autograph of Jimmy Cagney, a famous film star of the 1930s and 40s.

I spent the next 3 months or so, the summer of 44, kicking my heels with my shipmates, living in Fargo Barracks in Boston, waiting for my ship, the frigate HMS Bahamas, to be commissioned. Aged 18 years old, a bonnie lad from Scotland in a naval uniform I had a ball in Boston! I remember how good the Americans were to us, letting us use their canteens and free tickets to sporting events. A far cry from a wee fishing village in Scotland!

In August 1944, I made the Atlantic crossing again, in HMS Bahamas, via St John’s Newfoundland where we picked up an Atlantic convoy. We sailed into Londonderry which was the ship’s base for the remainder of the war. I was on convoys from Londonderry to Gibraltar from then until HMS Bahamas joined a convoy at Loch Ewe in November 1944 and headed for Poliarno near Murmansk.

The outward journey was uneventful, other than cold. On the return journey, our Convoy RA62 was attacked by U-boat u-365 on 11th December 1944. HMS Cassandra, a destroyer, sailing just ahead of HMS Bahamas, was torpedoed, her bows blown off with 62 men losing their lives. Ropes were thrown over her and our ship HMS Bahamas towed her back to the Kola Inlet where a Russian naval tug took over. Two days later the U-boat was destroyed, with all hands lost, by a Fairey Swordfish aircraft launched from HMS Campania. HMS Bahamas made the return journey to British waters on its own as the convoy needed to keep on going after the attack.

The remainder of the war I spent on HMS Bahamas convoying between Londonderry and Gibraltar, and after the war in Europe ceased, occasionally we diverted to Norway to escort German submarines to Scapa Flow. I transferred to HMS Drake in September 1945 and then HMS Newcastle, both in Devonport, where we were kept busy working on various other ships, awaiting demob. I picked up that demob suit in Portsmouth, in May 1947, aged 21 years.

Like many men who served in WW2, Jim has said very little over the years about his war service, other than he had it easy compared to the men in the Merchant Navy. Now aged 87 years (in 2013), it is only in the last two years that we have discovered that he saw action during his Royal Navy Service. We are hoping more memories and information will flow at the reunion in Loch Ewe in May 2013, which occurs in the 70th year since Jim first joined the Royal Navy.