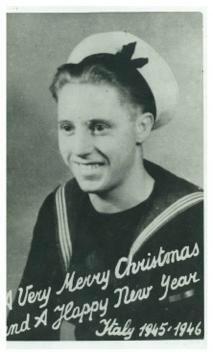 James Rice enlisted in the Royal Navy (HMS Collingwood) on 8th December 1943 aged 19 and served until his release on February 12 1947.

He served 11 postings as an Able Seaman throughout that time on a variety of ships – predominantly the Victory, Charlock and Eaglet (Mermaid).

He received the Atlantic Star and the Ushakov Medal for his service during the Arctic Convoys and proudly marched every year on ANZAC Day in South Australia with other Arctic Convoy shipmates.

He was a founding member of the Arctic Convoy club in South Australia.

Sadly he passed away only weeks before his Arctic Star arrived.

Following the end of the war James emigrated to Australia. During the trip out he met Jean Hubbert whom he married when they arrived. They settled in South Australia and were married for 63 years.

James Rice passed away on March 20, 2013 aged 89 years. He is survived by his wife Jean and 2 children and their families.