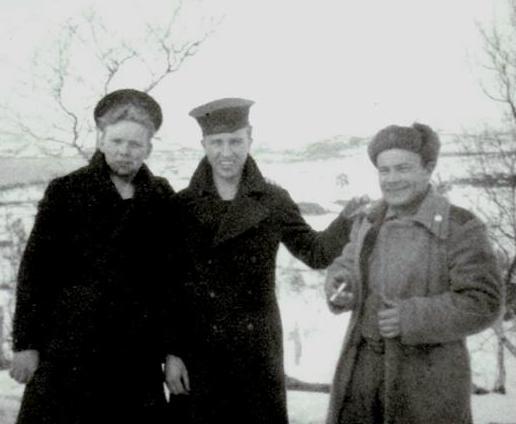 Written by and photographs by Jimmy Baynes.

Football in Russia (Anguilla and Goodall)

While the merchant ships went up river to unload in Murmansk, Anguilla’s footballers played against a team from HMS Goodall. The ground was frozen hard. We were glad of a run ashore to stretch the legs. We met a local resident.

One of the most hazardous times was when leaving for home via the Kola Inlet and entering the Barents Sea. A U-boat pack would lie in wait and it was very nasty indeed. On this occasion Goodall was torpedoed with heavy loss of life.

She remained afloat as a burned-out wreck. But as she was in the way of the home-going convoy we were ordered to sink her. Can you imagine our feelings?

Our escort group set off home, eventually steaming up the Mersey and berthing in Gladstone Dock. Believe it or not, the next day was VE Day and the war in Europe was over. We were shattered and I took some time to get over it.

I consider myself to be extremely fortunate to have reached the age of 90 and able to have contact with events which took place a lifetime ago.

I was born in East Ham in 1923 and left school at 14 to begin a seven-year apprenticeship in the printing industry. In 1942 I went to HMS Collingwood and began a career as a signalman.

I was drafted immediately to the Middle East and joined Erica, a flower class corvette based in Alexandria. We were part of the Second Escort Group which escorted convoys along the North African coast in support of Monty and the Desert Rats.

This was my baptism to the war at sea and there were several hairy adventures.

In February 1943 we were bringing a convoy from Benghazi to Alex when we struck a mine. One enormous explosion, Erica sank and I suffered severe burns. It’s a small world because I found myself on the Southern Maid, one of the escorts, and her signalman had been with me at Collingwood.

I was flown to the 63rd General Hospital in Cairo. There were beautiful beds that didn’t roll about, beautiful clean sheets and beautiful nurses. When I was discharged and given a warrant to travel back to Alex I looked like something out of a pantomime. I had lost everything and the hospital patched me up with whatever gear they could find.

A couple of years later, back in the UK, I joined the colony class frigate Anguilla and took part in the Arctic convoy described above. On reflection I feel that my four years in the Andrew was the finest finishing school ever. I certainly grew up.

And I marvel at the sea and the power of Nature, far superior to man. The sea is a battleground like no other. There may be mayhem, death and destruction on land and the aftermath is there for all to see. But this is not so in our operations. Be it a small corvette of a thousand tons or the Bismark, the sea clinically cleans up the wreckage and the scene reverts to normal.

On Tuesday 16th September 2014, I was invited to a ceremony at the Russian Embassy in London where Ambassador Alexander Yakovenko presented me with the Ushakov Medal. It was an occasion I will never forget. I’m sure that all present found it to be a personal, intimate reminder of the events of 70 years ago.

The Embassy provided a beautiful setting and the staff were extremely kind and helpful. In a way it seemed that the final piece of the jigsaw had been inserted. It is so sad that many of our shipmates are not around to share this wonderful experience. I will treasure The Ushakov Medal as a gesture of friendship and a special token uniting a band of special people.