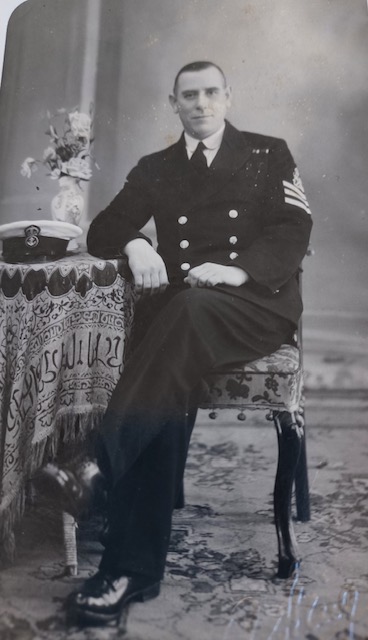 John Harvey was born 24th October 1899 in Manchester, he joined the Royal Navy aged 16 years old in 1915 and served 30 years in total.
He became a CHIEF PETTY OFFICER STOKER service number K56703 and also J44627. He sailed the world during his time in the Navy, and crossed the equator several times (I have his certificate from King Neptune).
He was aboard HMS Onslow on convoy JW51B and the ship was damaged by the Hipper of the German Fleet.
John was badly injured and when Onslow limped into Murmansk and he was taken to VAENGA a Russian hospital. When Onslow was fit to return to England John spent a year in various hospitals ( I have a 9 page medical report, of his injury and how he was mentally) He was left with shrapnel in his leg and walked with a limp. John was discharged from the Navy in 1945 ” unfit for service “. After the Navy he lived in Weymouth (having married a Weymouth girl in 1932 and had 2 children, my mother was the oldest) He worked at Alexander Gardens In Weymouth for 19 years. It was an entertainment venue where the likes of Bruce Forysth came and dances were held there (now it’s just gardens). He was also a commissionaire at Weymouth Pavilion, which is still at the end of the pier and still an entertainment venue.
John died in Jan 1975 , I was 11years old so too young to ask the all important questions, but mum said he never talked about the war years anyway. John was MENTIONED IN DESPATCHES for an action during the Convoy on Onslow, but no-one now in the family knows what he did to be awarded this sadly and as yet I’ve not found out.
Photos: In the Russian hospital…John is in the middle bed.