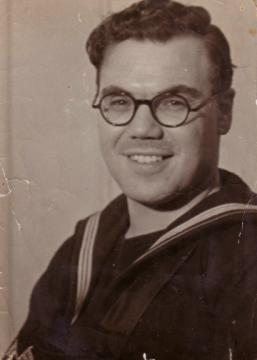 He was a school teacher, local preacher and local councillor, he enlisted in the Royal Navy to help the war effort in spite of being in a reserved occupation. When he was killed in November 1942 he left behind his widow Evelyn Walters and two twin sons David and John age 18 months.

John wrote an accout of his time on the Convoys, entitled Pen Picture of Russian Convoy De Marituri te salutant…! Here are three excerpts from it.

…the bottom of that lurch the seas hissed and foamed, there was leap of spray, and the waves beat her back to the opposite beam, where she hovered a minute before beginning the process all over again. This went on for hours, long hours it seemed in the darkness. And all the time above us on the flight deck another battle raged. There, where aircraft had been lashed down against the time of patrol, the wind was playing havoc. The firmest of lashings could not hold in that gale, and before long there were ominous swingings of tail planes, and movements of wings. One hurricane slid over-board into the night. No-one heard it go above the noise of the gale, but the lookout sweeping the horizon in a wide swirl through his binoculars saw the emptiness of the flight deck edge and knew that one was gone. It was that which set the full machinery of relashing in motion. Over the intercommunication loudspeakers the flight deck men were piped for. From the shelter of the mess up into the whiplash of the gale thay had crawled feeling their way in the darkness. The struggle up there between man and machine and the elements might have given glory to the Greek stage to titanic was the battle.

…I pulled myself to my feet, held tight against a seaward plunge of the gunwale, caught the next roll which flung me to the door, opened it against the blast and pitched headlong inside. No-one seemed to be asleep in the length and breadth of the ship. Some were making tea, others stood in groups chatting; still others were lying pale and listless upon benches and tables , glad to be here, centrally in the ship where the roll was less apparent. There was a cool current of air blowing. This tempted me to stay there, rather than to risk the warmer but less fresh air of my hammock space on the deck below.

So I lay outstretched upon a bench sliding backwards and forwards with each tilt of thedeck and by degrees fell into a fitful but very welcome dozing. Unfortunately it lasted just about an hour, and then reveille was sounded and the Bosun’s mate piped “Wakee wakee, all the hands lash up and stow!” I got up from my hard but welcome bed and proceeded below to lash up the hammock that hung emptily swinging all night. At the bottom of the stairs I paused aghast. The deck had the appearance of being visited by some wanton demon. Huge cases, hat boxes, broken crockery, books, soap flakes, sugar, tea, tins of milk were all mixed in a kind of nightmare Irish stew. The mixture was indeed as before the in the Coding Office, only, with more scope, the demon of the storm had properly allowed his imagination to run riot. He had excelled himself.

I trod gingerly amongst the piles of debris, came at last to my hammock, lashed it with difficulty from any position other than the vertical, roused one or two brave souls who had defied the riot and noise and had crept below to sleep. Then my mind turned to breakfast. It was herrings!

…In the midst of the talk the lights began to fail. They dimmed very slowly, brightened a little, then dimmed more rapidly and went out. It was an easy matter to switch on the secondary lighting, but I think that darkness coming upon us so suddnly made us realise what an easy target we were for lurking U-boats. The attempt to work in the lights of the emergency system did however occupy our minds until, eventually the lights suddenly came on again. And in the mild relief of that moment the thing I noticed most was the sudden whirr of the electric fan starting up. It was about one o’clock in the morning now and I was beginning to feel tired after a rather strenuous day, as it seemed to me by far the best thing to do, to retire and try to sleep. I said “goodnight” to the people in the office and went below. Yet sleep wouldn’t come. I have been in quite a few eerie places in my life, but to be down in the bowels of a ship when the engines are dead is an unnerving experience.

Ordinarily a ship pulsates with life even when at anchor. There is the throb from the whirring generators felt as a faint quiver of power throughout the whole ship, the hiss of air from the punkaloos, the noise of coming and going, all the vast life of a city in miniature. But now all that was gone. The ship was a dead thing afloat on the waves, and rolled sluggishly with every slight swell. The heart had stopped beating, that powerful heart, and there was no vibration of power from stern to stern. The fans too were dead. A hand thrust under the punkaloos missed the familiar gushing of the air, and the atmosphere was thick with the accumulated breathing of many people. Slowly the ship rolled over to one side and then as slowly rolled back on the other. She was dead!