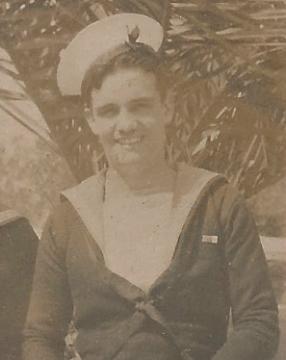 Joseph Edward Proctor was born on April 3rd 1925 in Shenton, Leicestershire to a farming family.

When his call-up came in 1943 he joined the Royal Navy as he had only seen the sea once in eighteen years. As he often told the family, he certainly saw plenty of it subsequently!

After training in Wales, Joseph was stationed on HMS Caroline in Belfast where he met his future wife Mary.

On 10th October 1943 he left Belfast on HMS Drury when she was escort to a westbound convoy, k316 (DE46) whose route took her 300 miles south of Iceland. We also know that on 19th November 1943 Drury set sail as support to Sierra Leone convoy SLI 39 reaching the Bay of Biscay on 21st.

Although quite young when dad talked about his experiences at sea, I remember him talking about the Russian convoys with the bitter cold and frozen guns and to me the exotic sounding names of Archangel and Murmansk!

Later in the war Joseph joined the Tribal class destroyer HMS Tartar (in August 1944) and saw action in the English Channel, the Mediterranean and from April 1945 in the far East when Tartar was present at the signing of the Japanese Instrument of Surrender on 2nd September 1945.

Sadly dad died on 11th January 1979 at the relatively young age of 53. So the family knowledge of his wartime service is not as complete as we would like.

Our much missed dad from his daughters Lorna, Jean, Maureen, Joyce and June.