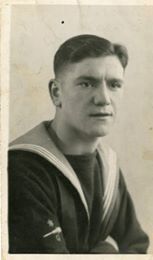 Owen Durkin was born in Greenock on 21st July 1921 but was brought up in Southside of Glasgow where he trained as an amateur Boxer, and continued to box for the navy. He served in the Royal Navy from July 1941 to Dec 1946. He met his future wife Doris Favell at Chatham Navy Base and they were married on 30th March 1944 at St Johns Church Glasgow. They had a family of three. Margaret, Owen and also Thomasina.

He described his experience on the ship to my son Kenneth as horrendous with an endless line of ships going backward and forward to Russia with food for the starving people. It was so cold and the ship was covered in ice, this was adding weight to the ship and slowing down the speed. “We had to shovel the ice overboard but it just froze up as quickly as we tried to clear it away. We were so cold it made us ill”.

While on deck we could see the torpedoes travelling through the water, hitting our ships in front and also behind us. We were like sitting ducks. You just thought to yourself we will be next and thinking “just hit us and get it over with to end this nightmare”.

Thankfully for us all, Owen Durkin and his ship survived and he returned home. He continued his boxing career and became a professional boxer and was active between 1945 and 1951. He was a Flyweight, Bantamweight, featherweight and took part in 35 professional contests. He eventually moved to Ottery St Mary’s Devon and passed away on August 2nd 1988 age 67.

Pictured are some of the letters and poems he wrote to his mother during the war.