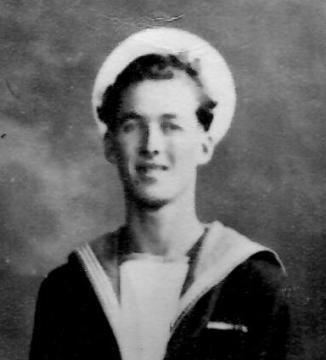 I volunteered for military service in the Royal Navy, in early 1943, at the age of 17 and was a boy sailor in HMS Ganges. I joined HMS Kent, an eight-inch heavy cruiser and the flagship of the First Cruiser Squadron in July 1943. We were based at Scapa Flow where there were three heavy cruisers: HMS Kent, HMS Berwickshire and HMS Norfolk. The Norfolk was the ship which shadowed the Bismarck until the HMS King George and HMS Nelson caught her. She was sent in to finish her off with torpedoes. We were on the North Atlantic and attacking Norway where the Tirpitz was holed up in the fiords as well as escorting the convoys to Russia.

The convoys started in August 1941 and continued until May 1945. There was a break in 1943 when Prime Minister Winston Churchill stopped them because of the high losses. Between those dates a total of 1,400 ships plied the route in 78 convoys. 5,000 tanks, 7,000 aircraft and 4 million tons of supplies were shipped. The first convoy carried forty Hurricane fighters and 550 pilots and aircrew of 151 Flight; some on the Aircraft carrier HMS Argus and some crated on merchant ships. 101 ships, including Royal Navy ships, were lost, including HMS Edinburgh a six-inch cruiser with all the Gold on her. I lost a cousin on HMS Matabele, a Tribal class destroyer, in 1942. She went down with all hands, a crew of 284.

We were the first convoys in January 1944. We sailed to Loch Ewe in the North of Scotland where the convoys gathered. During our tour of operations we escorted three convoys: JW56a; JW56/B; RA56, taking about three months in all. The weather was appalling, although this probably saved us from the Luftwaffe and the U/Boats. Temperatures were between 40 degrees F and 60 degrees F below zero.

The seas we sailed in were enormous with waves of 100 feet. The Kent’s deck was 98 feet, from the water and the waves were coming over A turret. My watch station was in a director on the starboard side of the Bridge open to the elements. It was like a big round steel tub with four men in it, a layer, trainer, range finder and a Petty Officer in charge. You can imagine with the freezing conditions what it was like to sit there for three hours on and three hours off. It was so cold you had to sit with your hands gripping the training wheel because if you didn’t you would not have been able to hold it if and when the situation arose.

Our dress was a quilted eiderdown canvas suit, covered with a black PVC suit which had press studs with fastenings round ankles, wrists and neck. On our hands we wore a pair of leather mitts with canvas backs and lined with sheepskin. The backs easily got damp and frozen so you ended up with frozen hands. We also wore helmets with fur on the inside and leather outers. These were quite warm at first but after three hours you were covered in ice and the hairs on your eyebrows would have snapped off if you had touched them. So you were glad when your relief came. No one was late on watch as it was a serious crime. The first place you made for when you came off watch was the bathroom and showers. There was always someone doing his washing who would help you. First thing was to help you peel your mitts off and then they would fill a basin with lukewarm water and place your hands in it.

I don’t know if you have ever had very cold hands or I should say nearly frost bitten hands but I can assure you putting frozen hands in warm water is the most excruciating pain I have ever felt. I have stood beside far bigger men than me – I say men I was seventeen – and we have cried buckets. After your hands warmed up, the goon suit, as we used to call them, had slightly thawed and someone would help you out of it. In your vest and pants you would head for the nearest shower to thaw out completely, until your next watch. The weather at that time, in January, was our biggest enemy. The ice formed from the spray and fog on the superstructure made the ship top heavy. Our eight-inch guns looked more like fifteen inches in diameter and occasionally we had to fire blank charges through them to shake the ice off. This was not very satisfactory as the noise carried a long way, giving away our position.

Our three convoys were pretty uneventful except for the weather and that was bad enough with lifeboats and life rafts being washed overboard. We didn’t go into Murmansk. Instead we went up round Bear Island, well into the Arctic Circle. One man who fell on ice on the steel anti-aircraft gun deck ruptured his spleen. The weather was so bad that the surgeon was unable to operate on him and he died from his injuries. We went into Akureyri which is at the top part of Iceland nearest to the Arctic Circle for a two day break and to bury him. There was an American freighter, the crew of which had mutinied and refused to go any further. They had lost Carley floats and life saving craft We sent a boarding party on board and arrested the ring leader. He was put in a cell on board HMS Kent until we eventually returned to Scapa. It wasn’t as easy as that because the American sailors urinated on us as we boarded them. We were not very gentle with them when we eventually got on board, and they sailed after our Admiral gave them some of our life-saving craft. This wasn’t very good for us because we only carried life craft for two thirds of our crew of 1,100. I don’t suppose a lot of people know but in those days when we went in to action we were locked in the gun turret.

That was my first ship and it is always the best one – she was a lucky ship. Lord Haw-Haw claimed that we had been sunk on one operation to Norway. The surgeon saw the torpedoes go past our stern. I wouldn’t be here if they hadn’t, as the turret on the stern called Y turret was my action station.

This was all more than seventy years ago. I have been back to Iceland once since then. In 2004, three of us, a piper and two singers, went for a week; going to schools, churches and the Icelandic Parliament performing Scottish songs and music. I was a little apprehensive at first as we were not very welcome during wartime. Of course the UK had invaded Iceland in 1940 but I need not have worried the Icelanders we met were all very hospitable.