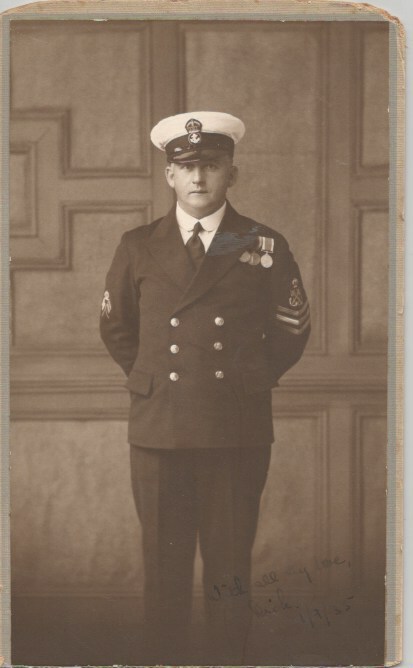 Richard Carson, the third of eight children, was born on 15th November 1901 in Wexford. The family moved to Manchester later where he went to school. He joined the Royal Navy in 1917 as a Boy signalman at HMS Ganges. Between the war years he served in a number of ships including H.M.S. King George V, H.M.S. Resolution, H.M.S. Queen Elizabeth, H.M.S. Dorsetshire and H.M.S. Inglefield. He became a Yeoman of Signals in 1935 and Chief Yeoman in 1939.

In 1940 he was seconded to the staff of Admiral Paddy Boyle and took part in the Narvik campaign. He survived the bombing of the Naval Headquarters which were situated at The Grand Hotel, Harstad. Two friends, Leading Signalman James Edward Lasseter and Marine Lewis Thomas George died in the bombing and are now at rest in the bleak but beautifully maintained cemetery in Harstad.

He was then Chief Yeoman of Signals on H.M.S. Trinidad when it was hit by one of its own torpedoes as it accompanied Convoy PQ13 to Russia. The ship spent several weeks in Murmansk being patched up but on the return voyage it was attacked and disabled by JU-88 planes and after the crew evacuated, the Trinidad was scuttled. CYS Carson was one of the last to leap to safety onto a destroyer, still clutching the ship’s papers.

He joined H.M.S. Carlisle in 1942 and in the following year was involved in the allied landings in Sicily. In October 1943 the ship was disabled by JU87 bombers as it was seeking to disrupt German convoys in the Scarpanto Strait and was towed to Alexandria where it proved impossible to repair. His actions in this battle earned him the award of Mentioned in Despatches.

Immediately after V.E. Day he was surprised to be seconded to join a mixed group of Naval and Army officers and sent to Minden which was in the British Occupation zone.

He left the Royal Navy in November 1945 after 28 years service and joined H.M. Coastguard where he served in Polruan, Sandgate and Looe. He left the Coastguards in 1956 because of ill health and moved to retirement in Felixstowe. He never recovered good health and died in January 1969.