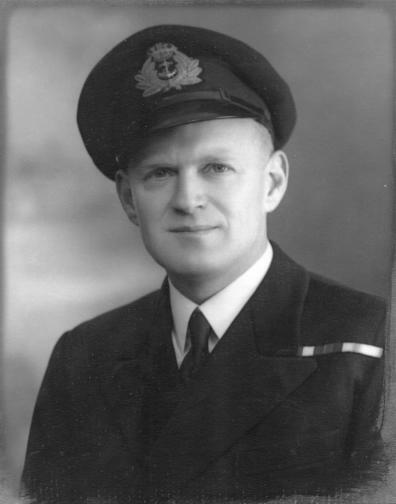 On 19th March I duly took up my first appointment as First Lieutenant of HMT Loch Monteith in Liverpool and arriving on board found no officers had yet arrived. The Coxswain invited me to the PO’s mess and the time being close to 11.00 hrs thought ‘Up Spirits’ was called for so handed me a large glass of neat Pussers rum. I did wonder how this was accounted for and discovered later that it was sometimes best to turn a blind eye to certain customs in trawlers.

We carried out patrols in the North Sea sometimes boarding small vessels to check their cargo. Whilst leaving harbour one day I had my first attack of renal colic. The ship returned to hand me over to an ambulance to be hospitalised for a week.

Following this episode I was appointed Number One to Mallow, a Flower Class corvette having just been completed in Belfast, and stood by whilst she was fitted out. She was duly commissioned and we commenced our duties escorting convoys in the Atlantic based at Londonderry and Liverpool. This was about the middle of 1940 to 1941 when the U-boat warfare was hotting up.

Although our convoys were often attacked, a number of ships torpedoed and many depth charges dropped we never had a confirmed submarine contact. However we did see plenty of foul weather.

Whilst based at Liverpool the Luftwaffe commenced dropping acoustic mines in the Mersey just before the Ark Royal was about to sail. There was a big flap on and I believe these were the first acoustic mines to be layed. We received a signal to steam up and down the Mersey at 12 knots. Nobody told us why but we could guess!! Corvettes were expendable and if we cleared a path for the aircraft carrier well, fine. Fortunately for us one of Liverpool’s pea soup fogs drifted in and the operation was cancelled.

My next appointment was CO of a Cricket class trawler HMS Paynter of about 850/900 tons. We were based at Belfast and spent most of our time escorting convoys along the east coast of England and from Loch Ewe to Iceland and back. At dusk Christmas Eve 1941 we were escorting a convoy up the east coast of England on the starboard beam of the convoy. The SO escort, in a destroyer, was about to depart to be replaced by another. As he was leaving he sent the following signal: “I am leaving you now. A submarine has been reported 50 miles ahead. E boats are active to the south, a mine has been sighted on the starboard bow of the convoy. Have a Happy Christmas.”

I said to Number One who had the watch, “It looks like being a busy night. I’m going below to have a short rest before the balloon goes up. Keep a good lookout for the mine and close the convoy for a while.” I was dozing off on the settee when a call came from the bridge. “Captain, you know that mine that was reported!” I said, “Yes.” “Well we just hit it!” It took a few seconds for the message to sink in. I sat up with a jerk and said, “What did you say?” He answered, “The mine just went clanking along the side but it didn’t go off!” So ended my little rest. The remainder of the night was without incident.

One memorable convoy was from Iceland to Murmansk. We were part of an A/S escort for PQ13 consisting of two destroyers, a minesweeper and two trawlers with one cruiser Trinidad accompanying as close cover and another west of Bear Island in support. Nineteen merchant ships sailed on 20th March 1942 and ran into ice in the vicinity of Bear Island. Paynter nearly got stuck in thick pancake ice and as we were finding it extremely difficult to push through we steamed in the wake of a large merchant ship and let her break it for us. However large slabs of ice slid under our bows and wiped off the ASDIC dome.

East of Bear Island the convoy was located by aircraft and repeatedly attacked by dive bombers. Three ships were sunk. The following day Trinidad and the destroyer Eclipse came in contact with three enemy destroyers and in a brief engagement in very low visibility one enemy destroyer was sunk and others damaged. Trinidad emerged from the fog with a list and smoke pouring from a hole in her side. There is a theory that Trinidad torpedoed herself. According to the story she fired torpedoes and a shell burst in the water and turned one of them back on to herself. A book has been published about this titled The Ship That torpedoed Herself by Frank Pearce a survivor. Trinidad made it to Murmansk but was sunk by aircraft on the way back.

As we were a coal burning ship we had to get coal. Eventually Russian women came down to do the coaling. The coal came in bags and there were openings on the deck where the coal had to be poured into the bunkers. We finally received enough coal for the trip. On the way up we were bombed by flights of planes. There would be about 20 or so of them and everyone would let fly firing on them. One pilot bailed out and his plane went into the water. Another one went away with smoke coming out of it. We got some of them but they couldn’t stay long as they didn’t have enough fuel. Then another lot would come.

In Murmansk we had to fend for ourselves as we were quite isolated and on our own. Planes came from Finland and bombed us in port every night. There were no shops, couldn’t buy anything as it was just a port. We didn’t run short of food as we got a barrel of salt pork which was terrible. I went round to one of the merchant ships and traded them some bottles of gin for some frozen chooks. We had one or two decent meals in the wardroom then.

The return convoy QP10 was subjected to air and U-boat attack for three days while on passage between Kola Inlet and Bear Island and four ships were sunk. When we left Murmansk with the convoy I saw this ship that had been bombed so I broke off to see if I could pick up some survivors. There were a lot of them, some in the water, others on rafts and others in boats and some of those men had been in the water for perhaps 10 minutes to 1/4 hour as when they lowered the lifeboats they capsized.

In those conditions they reckoned that 3 minutes was all that the human body could stand. We got about 6 of the men. In the meantime there were other boats and rafts drifting away. I eventually got about 50 or so of men. Whilst picking up survivors a plane flew over and machine gunned us but nobody was hit. Somebody reported a periscope I never saw it and there was little we could do anyway as we had no ASDIC. Also survivors were scattered over the area and I didn’t feel like dashing amongst them dropping depth charges on an unconfirmed periscope sighting. We had a spirit compass and the spirit froze and cracked the glass causing a large bubble. I filled it with gin and it was as good as ever.

In the middle of it the Captain came up to the bridge and said there were seven men still on board. He got into trouble for that as he wasn’t the last to leave the ship. A captain never leaves the ship he often goes down with it. He had left the men on board. These men were on the poop of the ship. I couldn’t work out how to get them off. They wouldn’t jump into the water as it was too cold for that. So I nosed around just under the poop and told them to jump. There were about seven of them I think. Some did and some didn’t and then with the sea the stern came down on my guard rail and smashed it so I went full astern. As soon as I did that the rest of them jumped so I got them all.

Continuing back after picking up these survivors I realised that the convoy had moved on. I didn’t want to be caught here alone so I decided to steer so that the convoy would be between me and the land so I went a short distance out to sea. That way any planes coming would find the convoy first and not me. The next morning about 11.00 o’clock there was a snow storm and you could hardly see anything. We had a lookout on the bow and he called out, “Ship ahead!” It was one of the convoy. We had found the convoy which was very lucky. We then took position on the wing of the convoy.

After we returned from Murmansk and celebrated in the wardroom. I said that I had made up my mind I was going to die and then I wasn’t afraid. My one thought was that I hadn’t left anything behind. Nothing. It was very difficult as I thought there would be no one to survive me. I had left Nancy at that stage and she was pregnant but she lost the baby when she heard that I was going to Russia. I only had to do that trip to Murmansk once only.

A Copy of the original document awarding Richard the D.S.C. for bravery in taking convoys to and from Murmansk in Russia during WWII is available for download below.