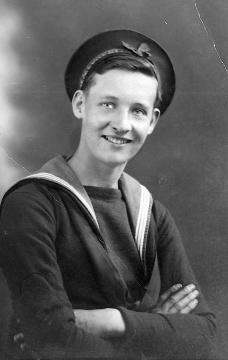 Information and photographs by Bob Brighton – edited by Leona Thomas.

The escort for RA62 sailed from Kola Inlet shortly before the main convoy so as to attack the assembled U boats, which lay in wait at the entrance to the inlet. HMS Bamborough Castle came across and sank U boat U387 on 9th December 1944.

Bob recalls: ‘We were lucky in the ASDIC cabinet as it was usually warm there. I was always in the ASDIC cabinet until Action Stations and then I would go onto the bridge. I’d use the oscillator and compass to get an accurate bearing on the submarines. We had 3 “squids” (depth charges), which we would throw ahead of the ship’s bows. If that didn’t get a sub we’d go over it and attack it again. We had to write a resume of the attack sequence of what we did and send it back to the Admiralty. They put the details into the Attack Training Machine and could tell if we’d sunk it or not. We must have, as she never returned to Germany.’ The convoy then left Kola Inlet on 10th December 1944. During the passage of the convoy on 11th December, HMS Cassandra was torpedoed and had to return to Murmansk for emergency repairs. The following day the Norwegian corvette Tunsberg Castle was mined and sunk. This was followed by an attack by the Luftwaffe by nine torpedo bombers but with no British losses and two German planes shot down. The convoy arrived at Loch Ewe on 19th December 1944.

Bob also remembers the sinking of HMS Lark on convoy RA64: ‘I remember we picked up U968 by its hydrophone effect, it was along by HMS Lark. It had just torpedoed the Lark whose stern was blown straight over onto the 4″ gun. Just folded up’.

Also on convoy RA64 Bob recalls: ‘I was called up onto the bridge by the skipper when HMS Bluebell was hit. I hadn’t far to go but when got there, there was only steam coming from where she had sunk. It went down in under two minutes. I think only one man got off.’

The Bluenose Certificate (photo) was signed by ‘Vernon’, whom Robert believes, was the convoy Commander, rather than ‘Magnus Work’ the captain of HMS Bamborough Castle who would normally have signed it. Given on 3rd January 1945 outbound to Russia on Convoy JW63. As an afternote, Robert also was due to get his “Crossing the Line Certificate” when on HMS Whitesand Bay having paid Coxswain Willis 5/- for it. It never appeared. Other shipmates aboard, Ernie Moseley & “Brum Hill” and possibly others had the same experience. If you’re still around Coxswain Willis you owe us 5 bob each! (Bob)