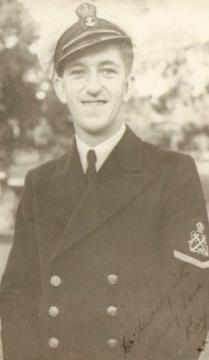 Written by and photos by Roy Williams

I joined the Fleet Air Arm on 31st August 1942 at HMS Duke (Malvern) and offered a Radio/Radar Mechanics Course firstly at The South West Essex Technical College (HMS Shrapnel,Walthamstow) then at HMS Ariel (Culcheth) for the Radar Course.

First posting to Twatt. Orkneys (HMS Tern) on 13th July 1943 till 14th October when, with the formation of 853 Squadron, we were aboard the Queen Elizabeth bound for USA to train at Squantum, nr Boston with 12 Avenger Torpedo Bombers.

With a train journey across the States to Vancouver we picked up Escort Carrier HMS Arbiter, through the Panama Canal to New York and home in convoy to join the Home Fleet on Escort Carrier HMS Tracker in June 1944 for our first Murmansk Run, followed by strikes against Nazi shipping in Norway, then on HMS Queen escorting the last Arctic convoy on VE Day.

On our return the Squadron was disbanded. I then joined the Pacific Fleet (MONAB) on Fleet Carrier HMS Indefatigable in Sydney. The Atom Bombs had been dropped so I was sent ashore to join 812 Squadron at Banksdown, then home on Repair Carrier HMS Perseus for demob at HMS Daedalus (Lee on Solent) on 14th May 1946.