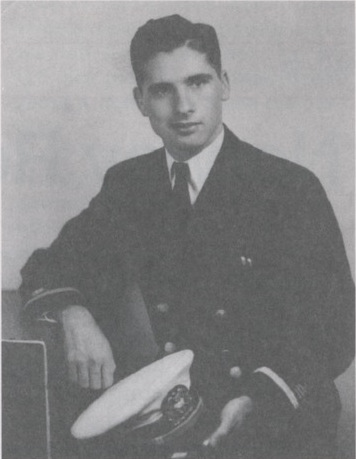 “My 86 year old memory has a special place for your town of Poolewe and the harbour where our convoy formed in December of 1944. I remember when Captain Carini and I attended the convoy conference in a building where your hotel is now located. Then our multi-nation convoy made the successful voyage to Murmansk where we delivered the cargo which helped to defeat the Nazis in that war. And then the British Navy so valiantly rescued the 500 Norwegian men, women and children, who had already suffered so much by living in caves on Soraya Island during that Winter. Our Captain and crew of the SS Henry Bacon were glad to share our living space, food and other necessities of life with 19 of these people.

Then in February of 1945, as we began our voyage home, with the Norwegians which were being transported to Scotland and a better life, we experienced a storm which damaged our ship and made it impossible for us to remain in step with the convoy. After three days of this horror in the severe weather things got worse. On 23rd February we were attacked by 23 Nazi torpedo bombers. Our US Navy gunners were able to down five of these planes in a fierce battle before the Henry Bacon was hit and mortally wounded. I was able to send out the SOS and was answered fro Scotland and the knew the convoy and escort were hearing this message. Realising that our ship was doomed, Captain Carini ordered the Norwegian men, women and children into a lifeboat. I, along with my small emergency transmitter were also put into the lifeboat. The storm had destroyed two of our lifeboats so there was not enough boat room left to save everyone.

As we moved away from the sinking ship we were able to see that Captain Carini and many of his crew were still on board. Many others went into the cold Arctic water. 26 of them were frozen or drowned on that day – brave men who gave their lives so that others could live. Today we should honour this heroic Captain and his crew men.

The next few hours were spent in erecting a mast for the antenna of my little transmitter and trying to keep the boat from capsizing in the stormy water while sending out a radio signal to any possible listening ship. Fortunately after three hours, we saw the beautiful destroyer, HMS Opportune. They had been able to find us as darkness closed in.

Then as waves lifted us to the level of the deck we tossed a baby or its mother to a crewman on the Opportune before we dropped suddenly some thirty feet. Then another human soul was tossed aboard as we rose again. Soon all were safely aboard the ship and we were given space to recover as the ship sped back to the convoy. A week later we arrived in Scotland and I said a fond goodbye to the Norwegians and the Royal Navy crew.

I remain forever grateful to the men of the Royal Navy for saving our lives and for all they did in that great war. I also have sympathy and admiration for the Norwegians who were so brutally punished by the Nazis for no apparent reason except that they stood in the way of aggression.