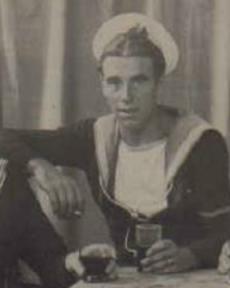 I served aboard HMS Glasgow, a light cruiser, from mid-1942 to mid-1944. During 1943 we completed two convoys to the Kola Inlet in Russia.

Based in Iceland we also took turns with other cruisers patrolling the Denmark Straits enforcing the blockade on enemy ships. During one of these patrols we sank the German ship Regensburg. HMS Glasgow was decommissioned after taking part in the Normandy Landings in 1944.

The photo above was taken at a studio in Alexandria to commemorate VJ Day, and I am the second from the left.

At the time I was serving aboard HMS Javelin, having been de-commissioned from the Glasgow round about July 1944, after the Normandy landings.