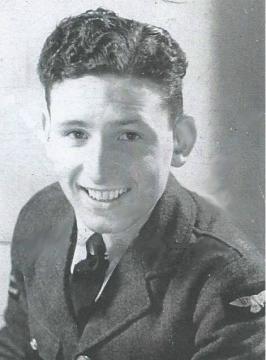 Photo and information by Vic Bashford. Edited by Leona Thomas.

Vic Bashford volunteered for Royal Air Force service in December 1938. He trained as an electrical fitter, joined No 615 Squadron at RAF Kenley, equipped with Gloster Gladiator fighters, and was deployed to France in December 1939.

The pace of war quickened, and on 10 May 1940 the Luftwaffe attacked his airfield at Abbeville. They were evacuated over the Dunkirk beaches, and so consequently he was at Kenley at the time of the Battle of Britain. Following this came a series of postings, before he was finally sent to No 134 Squadron, at RAF Leconfield in August 1941.

This was the prelude for “Operation Dervish” – the very first Arctic Convoy, which left Liverpool on 12 August 1941 and delivered a full RAF Hurricane fighter Wing to Russia (the full story of which is in the film ˜Hurricanes to Murmansk”, available in our museum shop).

Vic recalls: “I travelled out on the convoy Commodore’s vessel, the merchant ship Llanstephan Castle, with some of the Wing’s Hurricanes as deck cargo aboard. I remember our escorts: one was HMS Active, another was HMS Electra (which, a couple of months before, picked up the only three survivors of the Hood).”

“We arrived in Archangel on 31 August. It was on HMS Active that I was ferried across the White Sea to our operating base at Vaenga, by Murmansk (now the Russian air base Severomorsk). I was with our Squadron’s advance party of fitters and riggers, sent to be ready for the arrival of some of the Wing’s Hurricanes. Our activity at Vaenga was successful in every respect – as shown in the film – so we could feel that we had done what we’d been tasked to do when we left, leaving the Russians with the nucleus of a Hurricane force, and ready to receive almost a further 3000 later sent to them by many of the convoys over the following years.”

“We left Russia at the end of November 1941, and my trip home was aboard HMS Kenya, with a captain who enjoyed giving the Germans a bloody nose. So it was that instead of a straight passage as escort to the returning convoy (QP3), we spent some exhilarating moments bombarding the German coastal installations at Vardo.”

“This lost us our position as escort, and there was some confusion when it was thought that a radar contact was Tirpitz. It turned out to be HMS Berwick, inbound with another convoy, and due to pick up some of my colleagues for their return journey. Never a dull moment! That’s why I joined the RAF – for a quiet life!”

Vic was on another string of postings in the Middle East from late 1942 – Egypt, Palestine, Iraq, and Greece, until his return to UK in December 1945 for demobilisation on 05 January 1946.

Vic sums it up: “that convoy experience is the part of my life that is truly unforgettable”.