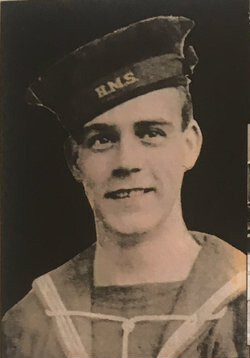 As a member and Chaplain of the Royal Naval Association, it’s my honour and privilege to be able to give you a brief history of William or Charlie as he was called, and his Royal Naval Service during World War 2. Able Seaman Gunnery Rate William Charles Constable completed his initial seamanship and gunnery training in Portsmouth. In 1943 Charlie was drafted to HMS Caroline, which was an old First World War cruiser and tied up alongside in Belfast. Actually, it is still there as a museum. The Caroline was being used as an accommodation and training ship during the Battle of the Atlantic. Charlie saw brief service on HMS Pegasus, also a WW1 ship, which was a Seaplane carrier. Her anti-aircraft armament had been improved because of insufficient land guns to fend off the Luftwaffe attacking the Belfast shipyard. Charlie was employed on the air defence system firing off at incoming enemy aircraft. He was then transferred to HMS Hastings, a Sloop deployed on escort duties for the North Atlantic convoys.

HMS Hastings was escorting convoy HX229 from St. John’s to Great Britain when the convoy came under heavy and sustained attack from two German U-boat wolf packs totalling 29 attack submarines. HMS Hastings deployed anti-submarine weaponry and managed to offer some protection to may of the Merchant ships, although some 13 ships were lost. Subsequently the Hastings also escorted convoy ONS3 and convoy SC128 whilst they were being attacked by groups of German submarines. The Hastings took part in many anti-submarine operations. The first was off of Ortegal in Spain. It lasted for two days. Together with a group of Frigates and Corvettes HMS Hastings was attacked by German aircraft: 14 Dornier Do 217s, 7 Junkers Ju 88s, and the new German weapon, the Hs293 glider bomb. The attack was unsuccessful.

Two days later in an operation off Cape Finisterre, the Hastings once again came under glider bomb attack, but was undamaged. Charlie’s station in one of the gun turrets would have meant he saw much of the enemy action.

Charlie then drew the short straw so to speak, and was drafted to serve on HMS Berwick, which was a County Class Heavy Cruiser. In October 1944 the Berwick was employed on the notorious Russian Convoys duty. The most direct route for these convoys was around northern Norway to the Soviet ports of Murmansk and Archangel. The shipping route passed through a narrow funnel between the Arctic ice pack and the German bases in Norway. It was very dangerous especially in Winter when the ice came further south. Most of the convoys were attacked heavily by German submarines, aircraft, and surface warships. For instance, in June 1942 convoy PQ17 consisting of 34 merchant ships and Royal Navy escorts was attacked by U-boats and aircraft. Only 11 out of the 34 ships reached the Soviet Union. The others were sunk. In all, 153 sailors lost their lives, many jumping into the ice cold sea from burning and exploding ships. The Soviet taker, Azerbaijan, had a mainly female crew and they were able to save their ship after it was bombed and set on fire by German aircraft.

It was into this nightmare scenario that Charlie was drafted. Conditions on these convoys were amongst the worst faced by any seafarer. Sailors found themselves in extreme cold conditions, strong gale force winds and pack ice. I personally have seen 50′ waves in the North Atlantic. I have been off Nova Scotia when it was so cold, sea spray froze in mid air and hit the deck like bullets. Everything freezes and gets buried under ice. My beard broke off as I scratched the side of my face.

But that was nothing compared to what these sailors on the Russian Convoy had to contend with. The loss rate for ships was higher than any other Allied convoy route.

During this period HMS Berwick was escorting convoys to North Russia and operating in the northern North Sea. In late October 1944 the ship carried Free Norwegian Forces from Britain to Murmansk so that they could participate in the Liberation of Finnmark, a country in the eastern part of Norway bordering Russia. Although the Battle of the Atlantic is recognised as the longest battle in WW2, there is no doubt that the battles of the Russian Arctic convoys were the most desperate and dangerous with a high loss of life. In no other theatre of naval warfare were the elements a greater threat than the enemy. Even on the larger ships, upper deck personnel faced immense risk from the cold and wet. Gunners like Charlie were particularly at risk as they were in static positions manning guns. There were many cases of these gunners freezing to death at their posts as the small electric heaters had stopped working. And of course, if you were sunk survival in the sea was only a matter of seconds.

HMS Berwick was also involved with two carrier raids against the German Battleship Tirpitz in 1944 and again in 1945. Charlie went through all of this.

Towards the end of the war in July 1945, Charlie was drafted to HMS Loch Quoich, a Loch Class Frigate based in Colombo, Ceylon, now Sri Lanka. No doubt rejoicing at being warm at long last. During this period the ship undertook various escort duties in the Far East against the Japanese before routine docking in Bombay in December 1945. Finally as hostilities all but ceased, Charlie was drafted to HMS Highflyer, a shore base in Trincomalee, awaiting passage home.

He was discharged from the Royal Navy at HMS Victory in June 1946 having served with honour in what was without a doubt, the most arduous and dangerous employments of the 2nd World War. Each one of these medals you see on his casket, especially the Russian Convoy Medal was well earned by Able Seaman Gunner William Charles Constable. He was one of our last few remaining heroes of the Russian Convoys. Each one of us here owes a great debt to this man. It is because of men and women like him who faithfully serve their country during times of conflict that you and I can sit here in freedom and peace. As they say in the Navy: All gave some, but some gave all.