About The Russian Arctic Convoy Project

What is The Russian Arctic Convoy Project?

A small team of committed volunteers working hard to create a multi-site museum around the shores of Loch Ewe dedicated to the Arctic Convoys. Loch Ewe was a hive of activity during WW2 and it was the point of departure for many of the convoys bound for Russia. It’s fitting therefore that there should be a lasting legacy along its shores to the heroes who braved Arctic waters under constant threat of attack from enemy aircraft and U-boats. Many wartime buildings, gun emplacements and anti-aircraft batteries still stand around the local landscape.

Ultimately, we intend to create a museum to store artefacts pertaining to the convoys and the recollections of those involved to preserve them for future generations. We also want to restore and preserve the wartime buildings for all to see. It’s a big goal but we feel a worthwhile one. 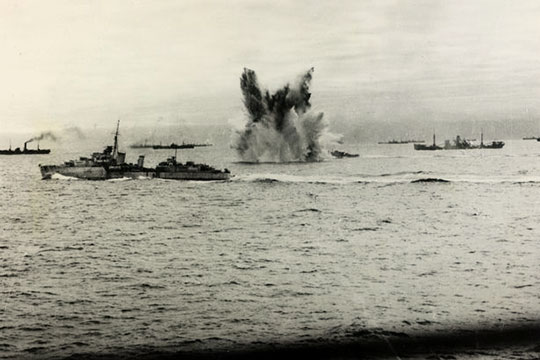 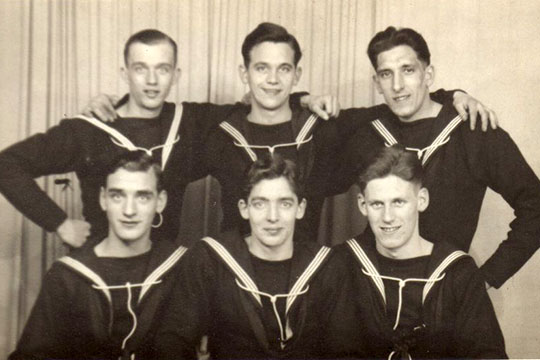 A multi-site museum in the North-West Highlands of Scotland, centred around Loch Ewe.

This will incorporate items from our collection on display in several local venues, the preservation of local sites and structures of interest, a virtual presence and ultimately a state-of-the-art exhibition centre built in Aultbea on the site of the wartime naval base.

To realise a professional and lasting legacy for all members of the Armed Forces and Merchant Navy who took part in the Russian Arctic Convoy campaign during World War II.

To collect, preserve and interpret artefacts and memorabilia for the public to view and to improve knowledge of the collection through education and research.

To present the stories of the convoys in such a way as to stimulate and engage the public of all ages and make the experience enjoyable and memorable for all.

To preserve the unique cultural assets of the region surrounding Loch Ewe ensuring their survival for future generations.

Jimmy McHugh was unlucky enough to have been sunk twice during convoy trips. His favourite ship, HMS Achates, a Class A destroyer, was sunk by the Hipper on New Year’s Eve 1942 during the Battle of the Barents Sea with the loss of 114 lives. 80 men survived. He went on to fight the Scharnhorst during the Battle of the North Cape on Boxing Day 1943. Jimmy assisted in the rescue of the 36 survivors of Scharnhorst from a crew of just under 2000 men. After WWII Jimmy befriended the survivors and would visit them in Germany. He also included the Scharnhorst on a memorial wall at the sea cadet headquarters, HMS Starling, in Liverpool. It was Jimmy’s belief that all the young men aboard Scharnhorst had no more desire to be at sea fighting battles than his own countrymen. They were obliged to fight for their country just as he was.

Jack took part in 9 return Russian convoys. He was also involved in the last naval engagement of World War 2, a clash with German Z-class destroyers.

Jack recalls that life aboard Diadem during the convoys was extremely unpleasant but was far better than that endured on the smaller escort vessels such as corvettes.

Meals were taken between watches of 4 hours on, 4 hours off, and were most often served cold. The interior of the ship was constantly cold, and water ran down the walls and soaked the floors. The engine room was a popular place to dry your clothing using hot pipes. These pipes were extended to give relief to those on watch on the bridge and gun platforms.
His shipmate Edward Collins wrote that every morning before sunrise and again before dusk, all hands stood to. This means that they manned their battle stations whether on watch or not. Eyeballs would swell from lack of sleep and the crew stank from want of a bath. Dettol in water was the ideal stand-up bath when you could manage it, and this also helped to conserve fresh water supplies.

In 1998 four veterans visited Poolewe and had the idea of building a museum on the shores of Loch Ewe to commemorate the Russian Arctic Convoys. From that time onwards, under the leadership of Jack Harrison they worked tirelessly to make their dream a reality.

Chris B. Tye (Leading Writer to the Senior British Naval Officer, Polyarnoe), President of the North Russia Club and Author of The Real Cold War

It is difficult for anyone who has never experienced the intense cold of the Polar Regions to comprehend fully what superhuman endurance was called for from the ship’s companies of warship and merchantmen so engaged. The escort vessels patrolling ceaselessly round the convoys shook and shivered as they climbed to the crest of each foaming, mountainous wave, hesitated, then plunged to wallow for a moment in the trough. The process being repeated with exhausting monotony. Prologue to The Real Cold War.

Spud was a radio operator aboard the liberty ship SS Henry Bacon, which carried a crew of 41 merchant seamen and 26 naval gunners. Whilst returning to Scotland from Russia in convoy RA64 carrying Norwegian refugees back to safety, she earned her place in the heroes’ hall of fame. The convoy came under heavy attack by Germans who sank both HMS Lark and Bluebell. Only one man survived the latter. As if the presence of the enemy were not enough, the convoy was to be hit with the worst storm in the area during the war, still remembered as The Great Gale. Henry Bacon suffered severe damage to her steering gear and rudder causing her to be separated from the rest of the convoy. A squadron of 23 German JU88 torpedo bombers found the all-but-helpless ship whilst searching for the main convoy. The gunners aboard Bacon waited until the Germans came into range and then opened with everything they had. The only lull came when the guns were being reloaded or the red-hot barrels changed. Throughout the battle Spud Campbell, Chief Radio Officer, transmitted SOS messages. When the action was broken off, the Germans went home less 9 aircraft and crews. They had hit Henry Bacon with all they had, including severe strafing of the ship from stern to stern with machine gun fire, and the torpedoes had found their mark. With the ship sinking, Captain Carini gave the order to Abandon Ship with the explicit order no crewman will enter the boats until all the Norwegians are safely put into the boats first. There was only one lifeboat and a 12-man life raft, so it was clear that there was not going to be enough room for everyone. What followed was one of the finest chapters in the annals of wartime heroism. Captain Carini made no effort to leave the ship and was last seen on the bridge waving goodbye. Chief Engineer Donald Haviland ordered a young crew member into his place in the lifeboat, saying, “Here, you take my place, you are young, and it does not matter so much if I get back”. He was last seen with Bosun Lammond aboard the sinking ship calmly standing side by side as though heading out on just another voyage. All but three of the ship’s officers and many of the crew were lost that day. Spud was ordered into the lifeboat with the Norwegians and emergency transmitter where he managed to rig an antenna despite the heavy seas and transmit an SOS. His actions saved all the survivors as the rescuing destroyers were able to home in on the signal. The SS Henry Bacon was the last allied merchant vessel of the war to be sunk in action.

After the war, the veterans periodically held reunions at Loch Ewe to remember their shipmates.

1999 Unveiling of the Russian Convoy Club Memorial at Loch Ewe in the presence of the Russian Ambassador to Britain, Yuri Fokine, and Captain Bob Hallan, club founder.

2011 Prince Michael of Kent attended the 70th anniversary of the sailing of Operation Dervish.

2011 Russian Arctic Convoy Museum Project is formed, constituted and registered as a charity.

2012 WWII Week celebrating the 70th anniversary of the convoys from Loch Ewe.

WWII Week included many talks and events to raise our profile and generate interest in the convoys.

2014 RACMP Chairman attends the unveiling of the Arctic Convoy monument in St Petersberg.

2017 We hosted the Loch Ewe WWII Festival, which featured re-enactments, music from the D-Day Darlings, period vehicles, including a Russian T34 tank, vintage make-up, a Spitfire fly-past, and a visit from 40 Russian naval cadets on the sail training ship Yuni Baltiets, which travelled from St Petersberg for the event.

2015–2016 Our exhibition was housed in Inverasdale School.

2017 The former Aultbea Butchers became our new Exhibition Centre. 2017 was a landmark year for us as it was our first year in our own building with full opening hours.

2018 We received funding from the Scottish Land Fund and Highland Leader towards the purchase of our Aultbea facility. We are now able to make it our permanent home.

We are currently refurbishing our Exhibition Center thanks to a generous grant from the Scottish Government’s Community Climate Fund.

Plans are well underway to expand the Exhibition Centre with a new extension which will include a café and research area.

Through a new website, we will continue to build a strong online presence which will include a thriving social media community and an online archive.

We wish to expand our team. As the project grows the current team of volunteers need to be a mixture of full-time, part-time and one-off specialist help to develop our vision.

Preserve local buildings. Several fragile wartime buildings remain around Loch Ewe which are in desperate need of preservation; without this, we risk losing them forever.

Finish our Wartime Trail. This will take visitors on a journey around the local area and show them all the sites of significance. 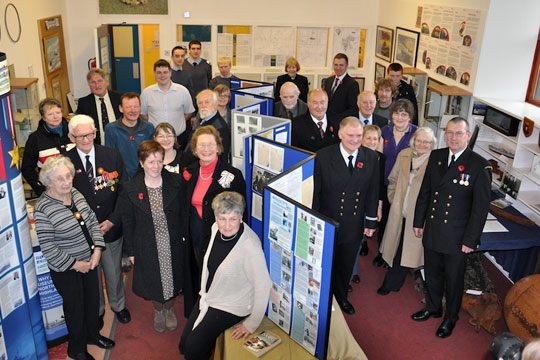