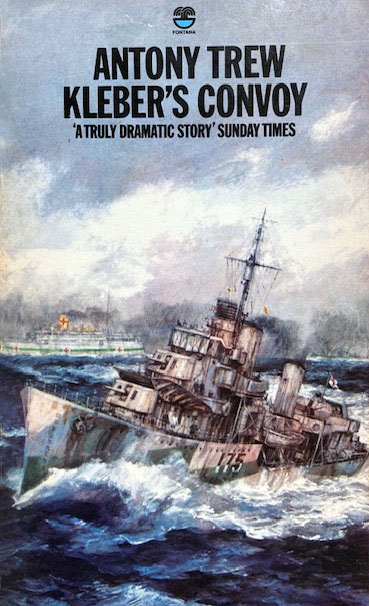 Kleber’s Convoy was written by Antony Trew, a South African naval officer and author who during the war served in the South African and Royal Navies. He had first-hand experience of the Arctic Convoys on board HMS Walker. He stresses in his author’s note, however, that Kleber’s Convoy is entirely a work of fiction: the ships, characters, U-boats and aircraft are all invented, as is Convoy JW137, the subject of the story. Nevertheless, his familiarity with the subject matter certainly aids the realism of the predicament in which his protagonists find themselves.

It is a novel that highlights the madness and futility of war. The two main characters, Francis Redman and Johan Kleber, were good friends before war broke out, and now they find themselves on opposing sides. It is 1944. Redman is Captain of HMS Vengeful, a destroyer forming part of Escort Group 57 which is to escort Convoy JW137 from Loch Ewe to Murmansk. Kleber is commander of U-0117, and he has concocted a bold plan to attack the unsuspecting convoy. He is a proven and well-thought-of U-boat Captain, commanding great respect from his crew. Neither Captain knows that the other will be among the enemy vessels, but when Redman receives an intercepted message that contains Kleber’s name, he is faced with the chilling prospect of hunting and destroying his friend.

What is made abundantly clear is the massive mental strain that is placed on all those involved. The tension is evident from the very beginning.

Well, gentlemen, I think it’s time we returned to our ships.
Redman sighed with relief. Once the thing started the tension went. It was like waiting in your corner for the bell for the first round. Come to think of it, he decided, convoy conferences were rather like those preliminaries. Of course only one of the contestants was present, but the other was there by implication, and the injunctions to escort and merchant captains all sounded rather like, “No holding, break clean. No punching on the break. You know the rules. Now go to your corners and come out fighting…”

The endless peril in which the crews find themselves, not just from the enemy but from the weather and cold is made very plain. The relentless monitoring for enemy activity coupled with the sleeplessness of the crew paints a picture of men under severe strain, unable to rest.

Since the convoy had been sighted, it was vital to put down surfaced U-boats anywhere in the vicinity. The Avengers would search in the dark with airborne radar, ready to attack with depth charges and rockets. Surface U-boats would be listening for radar transmissions with search-receivers, so it would be a cat-and-dog hunt in the icy darkness of an Arctic winter.

The hunt is an ongoing theme throughout. U-boat crews must find a balance between tracking the convoy and remaining undetected, and the author very effectively recreates the terror of the German crews who have heard the propellers of approaching destroyers and dived below a temperature layer to hide their position, all the while praying the depth charges don’t find them.

The eyes of the men were focused on the dials, gauges, tell-tales and valves which reflected the subdued light in the control room. The only sounds apart from the cryptic orders and reports were the low hum of the electric motors at slow speed, the faint scratch of instrument styluses, the dripping of water which had condensed of the inside of the hull, and the pings which came at regular intervals like the tick of a sinister metronome.

Inevitably there are many enemy encounters in the book in which U-boats and surface vessels are sunk.

The tension on Vengeful’s bridge was like that before a free-kick in the penalty area at a cup final. It was released with a sudden violence as sea, ships and air shook and trembled, great columns of water mushrooming skywards with a thunderous roar. It was as if the ocean-bed had erupted in a series of primeval explosions.

There is an interesting character comparison in this story between two U-boat Captains. While Hans Kleber fills his crew with confidence, Willi Schluss, commander of U-0153, is very much a reluctant leader.

What defence could he offer? The truth? That he was afraid. That he wanted to get U-0153 back to Trondheim in one piece. Not only for himself but for the fifty officers and men under his command. That he did not want them, or himself, to die for a mythical cause devised by a mad fuehrer who’d already lost the war and brought misery, death and destruction to millions of people. What German court-martial would swallow that?

Unfortunately, the crew of U-0153 sense that their commander has no stomach for a fight and is stalling, and while doing so he risks mutiny.

For those of us not familiar with life on board a destroyer, there is a great deal of description of everyday tasks to help paint a picture of what the crews experienced in the Arctic waters:

Working in darkness, the ship pitching and rolling, Vengeful’s crew fought with picks and steamhoses at ice which threatened the stability of the ship and the efficiency of its weapons. It was a continuous struggle which they could not have won but for rigid maintenance routines and the steam jackets and lagging around the gun mountings and other moving parts.

Similarly, there are descriptions of the claustrophobic environments U-boat crews had to endure.

The atmosphere was fetid with odours of diesel oil, decaying food, sodden clothing, human bodies, and a faint trace of chlorine gas from the battery compartments below the control-room. Gas leaks caused by depth-charge damage on her last patrols were supposed to have been made good during U-0117’s last refit in Trondheim, but the turn round had been a quick one and the workmanship less than thorough.

Back on the bridge Kleber concentrated his faculties on a mental picture of the convoy ahead shrouded in darkness. He was barely conscious of the steep seas before which U-0117 ran, slithering and surging like a surf-rider; of the sting of sleet and snow driven by the wind; of the frost which numbed the flesh of his face outside its mask; of the buffeting of icy seas which flooded the small bridge, at times forcing its occupants to grip the rail and hold on for dear life or, losing their foothold, to rely on the steel belts which secured them to the superstructure.

Insights are also given into the logic behind the various strategies adopted by both sides:

If the submarine they were hunting heard their radar transmissions increase in volume it would certainly dive, in which case the chances of attacking it in bad weather would be so slight as hardly to exist at all. On the other hand, there was just a chance in poor visibility of getting reasonably close if the weather sufficiently hampered the U-boat’s search receiver. Redman was aware, however, that Vengeful and Violent’s prime task was to put the U-boat down before it picked up the convoy and made a sighting report.

The author has also gone to great pains to explain the equipment used by the crew, the acronyms used to describe it, and its purpose, such as HF/DF (high frequency direction finding, known affectionately by the Royal Navy as huff-duff, which gave the bearings of ultra-high-frequency radio transmissions made by U-boats). All such terms are made clear.

Overall, it is a sad tale of reluctant men forced into a conflict that by cruel chance sees former friends in a desperate battle on opposing sides. The author successfully invests the reader in each of the main characters, bringing them all together at the climactic ending that again reinforces the message of the madness of war.