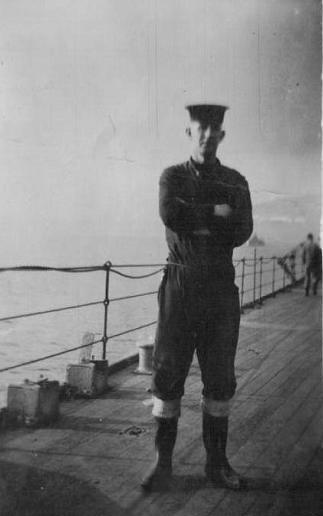 Our Dad, Denis Anthony Spillane (known as Tony), was born in Glenbrook, Cork, Eire, in 1918. He was the youngest of 11 children. He lost his father when he was 2 years old so his mother reared the family, who were fishermen, in poor and harsh conditions.

Dad left Eire for England in 1935 when he was 18 and joined the Royal Navy for the duration when war broke out, despite being Irish born and exempt. January 18th, 1940 saw him, along with about 1,000 other recruits, go through one of the first initial training classes at HMS Collingwood, Fareham, Hampshire.

On June 9th 1940 he was in Freetown, Sierra Leone on the Edinburgh Castle before joining HMS Delhi, a Danae class light cruiser as one of the gun crew. The Delhi patrolled the South Atlantic and Southern Indian Ocean on anti-submarine and convoy escort duties.

From September through November 1940, Delhi took part in Operation Menace, an action against Vichy French forces in Dakar and Libreville. On December 1st, 1940 Dad crossed the equator and received his “Crossing the Line” certificate. He remained aboard the Delhi until June 1941 when she docked in New York for a refit.

Dad then joined HMS Kent in September 1941 until October 4th 1943 as part of a gun crew. By now he was an able seaman wearing badges noting he was a quarters rating, 3rd class.

His first assignment with Kent, in December 1941, was to escort Anthony Eden the British Foreign Minister and his Russian counterpart, Ivan Maisky, to Murmansk in Russia. He got his “Blue Nose” certificate on December 12th, 1941.

Subsequently, He was on convoy escort duty for PQ13, 14, 16 and QP 9, 10, 12 and JW 54A, 54B, 56A and RA 052. Kent also routinely patrolled the Denmark Straits and the Barents Seas. He certainly experienced air and U-Boat attacks as well as the threat from German surface vessels. All the while, he and his shipmates endured the bitter cold, extensive ice, gale force winds and towering seas. Today, we cannot imagine the terrible conditions that went on for him and his crewmates. He would only mention the cold and the ice and never spoke of warfare at all.

From September 1943 until war’s end he was posted to HMS Elfin, a submarine supply base, in Blyth, Northumberland. Here he met and married my mother, Elizabeth, known to all as ‘Betty.’

After the war, he suffered from what is now known as PTSD for many years. Like many of his comrades, the war took a lot of life from him and he was of a somewhat nervous disposition. But, he was a good man, sensitive, extensively read and intelligent with a keen sense of humour. He spent most of the late 1950s and 1960s working at the Underwater Weapons Establishment in Bournemouth, Dorset. On many occasions, he travelled to the North of Scotland on confidential matters for the Admiralty.

He died, too young, in 1970 at the age of 52. He never talked about his service although we were aware of the cold he experienced through photographs. The research for his war record gave us an appreciation of a side of him that we never really knew and made us proud of him. We can only admire and respect the courage of such men who would say they just did their job.