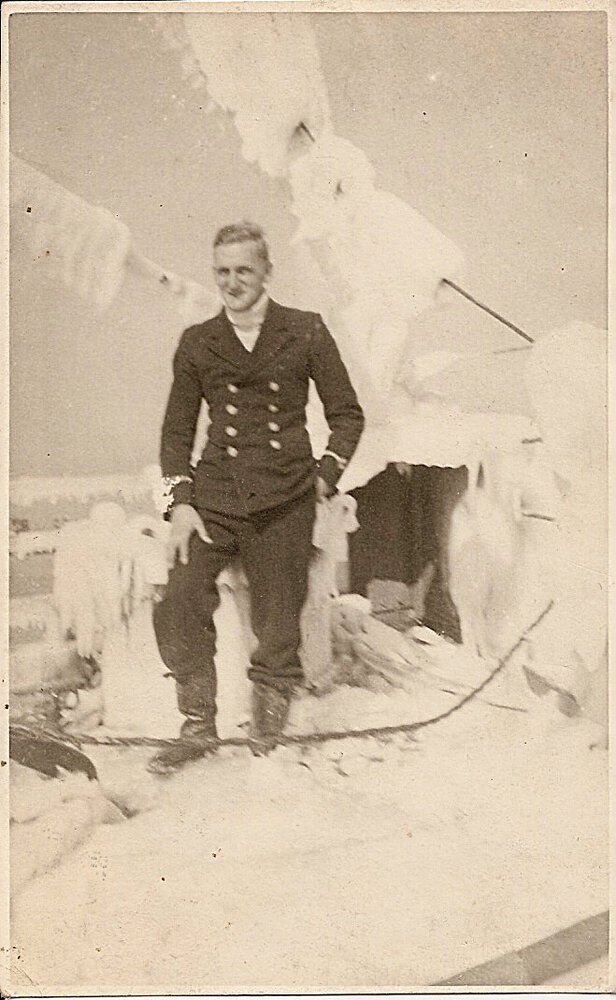 Born in Newcastle-Upon-Tyne & living at various addresses in Shincliffe, Co Durham, he attended local primary schools & Dame Allan’s secondary school. On leaving, he was informed by his father that he was going to sea & took up with what was then the Anglo-Persian Oil Company, later to become British Petroleum or BP as we know it today.

His first trip as 3rd Mate was on British Corporal which we know was part of convoy PQ14.

The accompanying photo shows him in Murmansk in full arctic garb.

Coincidentally, one of the other vessels in PQ14 was the Atheltemplar, Athel Line being part of Tate & Lyle group, a company I briefly worked for in the late 1990s, transporting molasses around the Eastern Caribbean.

Family lore & his own recollections are that, while on board British Corporal in Loch Ewe, as the most junior officer, he was detailed to accompany an injured rating to hospital at Strathpeffer.

Here, he apparently met a nurse called Joyce Bowes from Consett, Co. Durham. Post war, he somehow managed to track down Joyce, they married on 14 Dec 1948 & went on to have 3 children.

For his war service, he was awarded the following medals:

Serving as Commodore of the BP fleet on board British Respect in 1977 at the Spithead Review, he was awarded the 1977 Jubilee Medal.

More recently, he was awarded the Arctic Star.

He was also offered the Ushakov Medal, but declined as he didn’t approve of Russian Communism.

We have all the medals, recently fitted with new ribbons & mounted in a case & we also have his old discharge books & Master’s Certificate of Competency.

At Spithead, he was invited to a cocktail party on board RY Britannia & was presented to Her Majesty.

He maintained that it was one of the proudest moments of his life.

We have visited RY Britannia in Leith & seen the bulkhead mounted chart of the Spithead Review & it was quite a moment for our family to see his name listed as Master & Commodore of British Respect.

He retired on 10 July 1978 & lived very happily in a self-converted house in a small north Northumbrian village where he was a well known part of the village scene for many years, until his passing in 2015.

He is interred, in his last full blues uniform, as requested, alongside Joyce who pre-deceased him, in the local parish churchyard.

We still possess the “Red Duster” from his last trip on British Respect & from a VLCC, it’s a big flag, 12ft x 6ft.

As Commodore of the fleet, he was entitled to fly his own house flag which differed from the norm by having a swallow tail at the free end, but we haven’t found that.

The full list of vessels with dates accompany this, all taken from his discharge book.

Like many of his generation, he was reluctant to talk about his wartime experiences.

He maintained for years that his first command was “Khuzistan” & that the ship’s bell we found in his garage was from that vessel. However the bell is not engraved, as is tradition & there is no entry for “Khuzistan” in his discharge book.

That vessel was part of the Frank C Strick line out of Newcastle & a film is available to buy online, showing cans of kerosene being unloaded close to shore, somewhere in the Persian Gulf, so maybe there is some credence to his claim.

I recall visiting him on one of his vessels (can’t remember which) in Brigham & Cowan’s drydock in South Shields, when dockings lasted 6 weeks or more, next door was an Athel Line ship & being told that it was a “Treacle Tanker”.

Little did I know then, late 50s or early 60s, that I would one day work on other ships of that company.

As can be seen from the dates of trips he made, they were very long & he was away for much of my time growing up.

I was at boarding school from age 11, then went to sea myself & saw even less of him, some years as little as 6 weeks in any 52. At one point in the early 1950s when he was away, my mother was raising 3 children under the age of 4, single handedly, but with some help & support from her family.

From 28 Oct 1971, when he stood by the British Scientist under construction in Sakaide, Japan, until 9 June 1974, he was Master for a few trips.

In 1974, he was standing by the British Respect under construction in the same yard & until his final trip & retirement in 10 July 1978, again as Master.