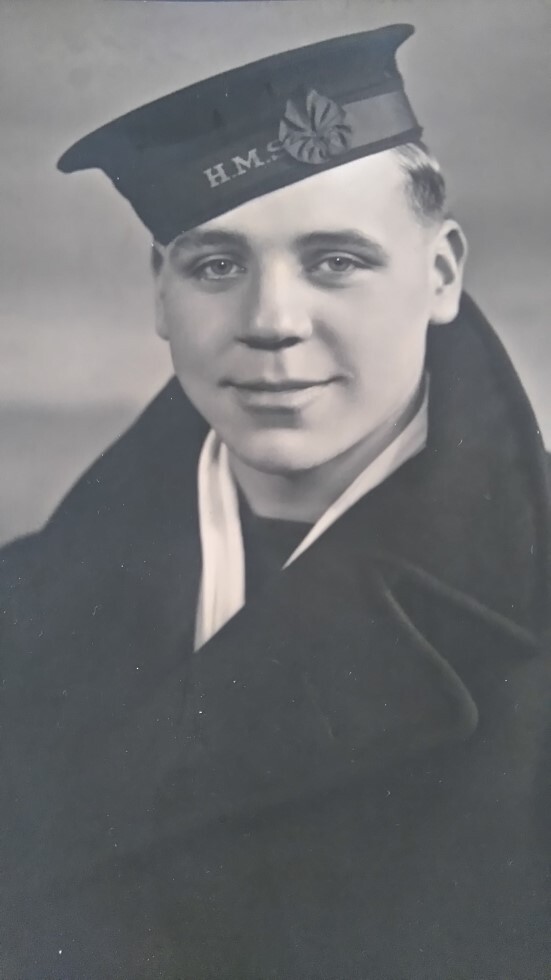 Allan Leigh was born on 9 August 1925 in Didsbury, Manchester.

At 18, Allan was called up, and out of the three armed forces, decided to join the Navy in 1943. His brother Lawrence was already in the army, in the Royal Engineers.

During the war, Allan spent time training on the Isle of Man and in Portsmouth. Allan trained to become a coder, sending and receiving coded messages. Allan said that he became a coder because he was “useless at signalling”.

His service record which he kept, as well as his uniform and discharge papers, gives details of the land training grounds he was based at including HMS Collingwood where he started his training on 23 August 1943, and throughout the war he spent time at HMS Royal Arthur.

Allan’s service papers also list the ships he served on including HMS Drake, Valkyrie II and Wayland. His most memorable and lengthy service was on the HMS Beagle, where Allan was part of the Arctic Convoys. Allan served on HMS Beagle from 2 October 1944 to 30 April 1945, and was discharged from service on 24 October 1946 at HMS Lochinvar.

Allan received his Arctic Star medal, and a further two medals from the Russian Federation. The first in 2013 being the Certificate of State Award, a commemorative medal for the 70th anniversary of the Victory of the Great Patriotic War, and the second award was the Ushakov Medal in 2014.

Allan was immensely proud of his medals and his time spent in the Navy. He would recall his time in the Navy as an enjoyable one, he was able to travel to many places including Bombay, what is now Mumbai India.

In 1946, when the war ended, he was discharged from the Navy and went home to Manchester. Shortly after the War, he met Ellie, and they married on 25 March 1950. Soon after they married, Allan and Ellie made the move to Kendal, Cumbria where they stayed for the rest of their lives. Allan passed away peacefully at his home surrounded by family on Friday 19 January 2018, and will be remembered fondly by all who met and knew him.