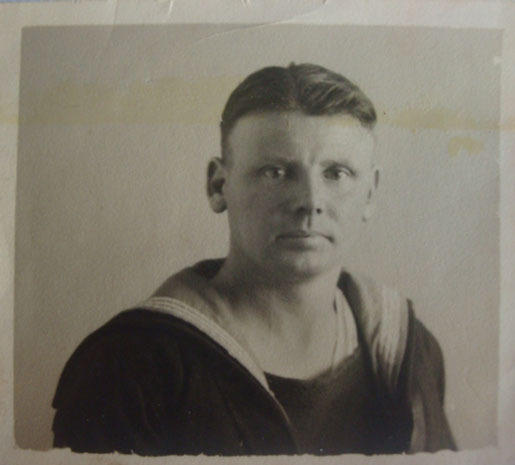 My father joined the RNVR in Dundee, Scotland during the Great Depression of the 1930’s and was on one of the battleships when the King George VI reviewed the Home Fleet at Spithead in 1937.

While serving on the cruiser HMS Penelope, the ship became part of a famous squadron called Force K which was based in Malta along with the cruiser HMS Aurora and the Destroyers HMS Lance and HMS Lively.

HMS Penelope was hunted mercilessly by German and Italian bombers but she finally made it to Gibraltar in April 1942 then onto Bermuda and the US Navy Yard in New York to be repaired. The dockyard “maties” in Gibraltar were so astonished at the number of shell holes in the hull of Penelope that they christened her “HMS Pepperpot”.

Later in the War, my father joined HMS Scourge, escorting convoys to Russia. I can remember as a child a certificate he received called “Order of the Bluenose”. It was given to men who had been on convoys which had sailed to the north of Bear Island in the Norwegian Arctic en route to Russia. A framed copy used to hang on our living room wall.

Two years ago I applied for and was sent the Arctic Convoys medal from the Ministry of Defence. I went over to UK and had a picture taken with sister and myself holding the medal at my father’s grave. He died in 1975.

Details of “Object of the Exercise”

“The chief reason why we are proceeding to act as additional escort for the returning Russian convoy is that on the outward passage the convoy was heavily attacked by Ju. 88 bombers at points ranging between the Faeroes and Bear Island, no damage was sustained by this convoy and 9 bombers were shot down, but there is every probability that the enemy will try again on the way back both with planes and with U Boats. We expect to meet the convoy early on Tuesday.

(this next part is in handwriting)

Stop Press. One escort and one merchant vessel have already been damaged by torpedoes on the return journey.