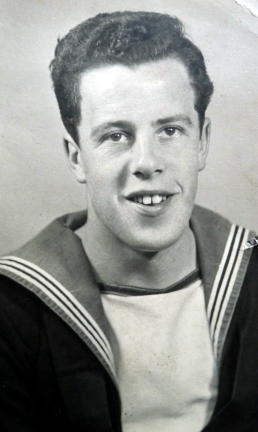 Contributed by Tim McGuinness (son) and illustrated with family photographs.

Basil was called up to the Royal Navy in 1941 and served as an ordinary telegraphist on HMS Vizalma (FY286), an anti-submarine warfare trawler, until 1946.

HMS Vizalma was part of convoy JW-51B (JW51B) which sailed from Loch Ewe to Murmansk on 22nd December 1942. Her commander was, at this time, T/A/Lt. John Reginald Anglebeck, RNVR. The convoy was attacked on 31st December in what became known as the Battle of the Barents Sea. Basil makes reference to it in his W/T log diary for that particular trip.

After the war HMS Vizalma became a trawler based in Grimsby and fished the waters off Iceland. On 4th November 1964 she was brought back up the river Tyne and broken up at Dunston. On leaving the Navy Basil trained as an English teacher and became head of department at St Thomas More Catholic School, Blaydon. He taught until 1971 when he died of a heart attack on 7th May, aged just 49. He was survived by his wife Nell and children Eileen & Tim.