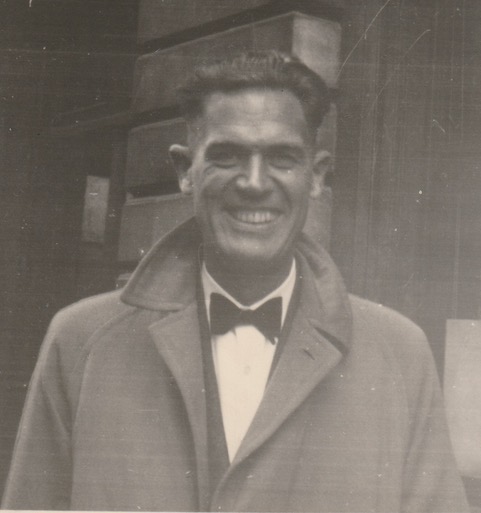 He died in 2000, before he could receive his “Arctic Medal” from the Russian Embassy, as it was only awarded to surviving men at the time of the award, not those who had died before they decided to make the award.

From my Uncle’s service record, we know that he volunteered for the Royal Navy in September 1940, and was demobbed in April 1946 as a PO Stoker.  He served on HMS Berwick during the period 8 Feb 1941 to 3 sept 1943.
HMS Berwick was a County class heavy cruiser, built on the Clyde and launched in 1926. She was fitted with eight 8″ guns and eight 21” torpedo tubes. With a full complement of 710, a displacement of 9870 tons, she had a top speed of 31 knots.
She saw service in the Atlantic and Mediterranean 1939 – 1940. Involved in the combined operations in Norway April 1940, to slow the German advance into Norway.
Returned to Home Fleet, after extensive repairs at Rosyth, in July 1941
15 December 1942, left Loch Ewe, as part of the convoy escort for JW51A, arrived Kola Inlet 25 Dec 1942. Escorted convoys RA51 and in Feb 1943, convoy JW53, followed by patrols in the Denmark Strait until June 1943. In July 1943, HMS Berwick was involved in diversionary tactics to hold the enemy in Norway during the allied invasion of Sicily in July 1943.
My Uncle Bernard left the Berwick in September 1943, as a Leading Stoker, and after further training, joined HMS Narborough in March 1944, a US “lease/lend” frigate, which was part of the D-Day Normandy landings.

He never spoke about his experiences during the war. His mother always said he was a “completely changed man when he finally came home”.