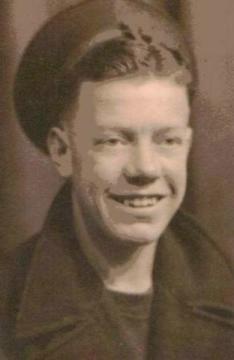 “At the age of 17 years I decided on the Royal Navy at Edgware and passed a test of acceptance.

I was not sorry to see the end of the Walker (First World War Destroyer). I found it very old, freezing cold, sleeping where you can when you have your duty to concentrate on such as look outs, never knowing when it was our turn for a torpedo. Was constantly on your mind in treacherous conditions – rough seas. It just threw up every which way and would rise up and come down on another wave with a loud bang and a shudder – it would last for ages.

With the mountaneous seas and the full icy killer conditions you could not put enough clothing on. I remember wearing 2 vests, longjohns, pullover, 2 sets sea boot socks, grey issued coat and duffle coat on top, 2 balaclavas and 2 pairs of gloves – all at the same time, and you would wear your clothes constantly. You could not take any chance of removing your gloves as the cold still would take your skin off.

Our duty was to knock the ice off the guard rails and the guns which was a frequent occurence.

The memories I do have left is the ship’s company photo taken on board. I often think of the lads and to the veterans that are not with us now.”

Photograph – The crew of HMS Walker