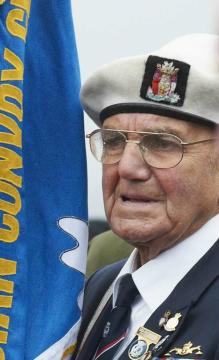 Bill Bannerman served on the navy destroyer, HMS Verulam, and was on one northbound convoy (JW57) and three homebound convoys (RA56, RA57 and RA59) from February till May 1944.

Bill had started training as an apprentice engineer and when he joined up he had hoped to use this training but was told he needed to have three years experience and he had had only two, and so he began naval life as a seaman, then later as a stoker working in the engine room.

HMS Verulam carried an extra 17 personnel. Atrocious weather made carrier operations on this convoy extremely hazardous with up to six inches of snow being recorded on flight decks at one point. Twelve U boats had been stationed near Bear Island and one merchant ship was sunk on 30th April by U711, with a loss of 43 of her crew and passengers, which had totalled 235.

Bill recalls: ‘It was bitterly cold on deck. I once saw a tanker blow up, it was gone in minutes’

After the war Bill joined the Royal Fleet Auxilliary for a while working on supply ships and oil tankers, and then he worked in John Brown’s in Glasgow.