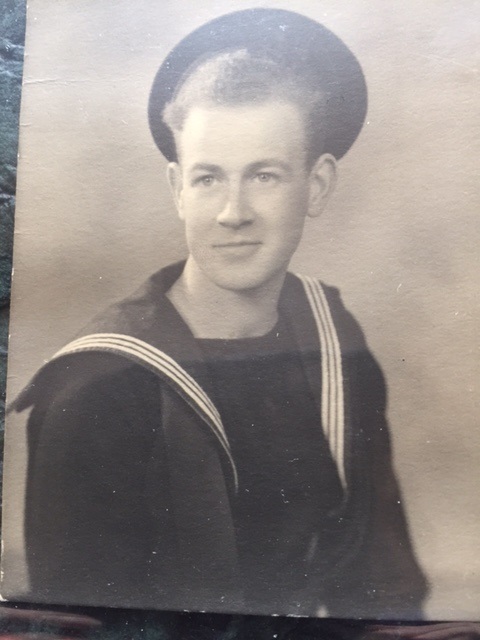 “In May 1942, on my 17th birthday, I received an OHMS letter telling me to report to the Caird Hall in Dundee for a medical exam and testing for the services. When I got there, there were hundreds of young men waiting for medicals etc; speaking to those who had passed, all had been drafted into the Black Watch which I didn’t fancy so when it came to my turn I requested to join the Royal Navy. I was told in that case I would have to sit an intelligence test which I passed and I duly received my call-up papers. I was told to report to HMS Raleigh at Torpoint in Devonport. This was a 600-mile journey to a foreign country as far as I was concerned being a country boy from Angus! My parents came to Arbroath Station to see me off. The train was packed solid with service personnel and even the corridors were full by the time we got to Edinburgh. I arrived at London Kings Cross at 8.30am, caught the tube to Paddington and from there the 10.30am Penzance train called The Cornish Riviera. I found all this a very new and unnerving experience.

When I arrived at North Road station at Plymouth there was a whole gang of us for HMS Raleigh; we were directed to 2 Bedford trucks and driven to Torpoint and HMS Raleigh which as a shore base, was to be our home for the next 10 weeks, Nissen huts with bunk beds.

The training was hard and difficult for me as a lot of it to begin with was on the parade ground. We had a good and fair Chief Petty Officer Pike and he put us through our paces on small arms e.g. Lewis, Lanchester, and 303 rifles. We also went to a range and fired a few hundred shots.

Prior to commencing training, we had to have our inoculations etc and several hundred of us had to stand around with nothing on waiting our turn, humiliating to say the least. We then learned about all the different knots, some of which could save your life if you had to abandon ship. We spent several days on the River Tamar learning to row which was a laugh followed by gas training. We had to be able to enter a building in complete darkness and leave by another with and then without a gas mask. A real ordeal for me was swimming in full uniform from one end of the pool to the other as I had never swum before.

We were taken aboard ships in Devonport harbour just to give us a taste of life aboard ship at which point a lot of us wished we’d never joined the Navy! We used to parade at 05.30, put on a pack and march for 12 hours; We also had regular spells of PT. The trainers were evil. If you were last at anything you got whacked up the backside with a sandbag. We had unarmed combat sessions, one of our number was a karate expert and threw the instructor about a bit which resulted in him having to run around the parade ground in oil skins and a gas mask!

After the 10 weeks training were up and returning from a week’s leave I found I was the only one to report to HMS Drake, a huge barracks in Devonport. I was in a huge barrack room with about 200 others, with my kitbag and hammock. We had to parade each day and we were detailed some work but you could wander around all day doing very little if you had a piece of paper in your hand! At night we had to to take part in fire fighting duties because Plymouth was being bombed every night.

Fortunately, I received a draft chit torpor to HMS Scorpion which was a new Destroyer in the harbour; it had taken half a day to settle into Drake and it took another half day to leave it. We sailed up the west coast of England and Scotland and boy was I seasick!! We arrived in Scapa Flow the next day and after loading up with stores and ammunition we sailed for Loch Ewe to pick up a convoy for Russia. 25 merchant ships of all sizes and 5 more Destroyers which included Saumerez, Savage, Stord, Swift, and Obedient. Stord being manned by Norwegians. We were second in command. We also had another Norwegian in our fleet called Svenna which joined us in Iceland and this flotilla stayed together for the next 2 years except Saumerez and Scorpion who escorted the Queen Mary halfway to America with Winston Churchill on board.

I was never seasick again but the sea was absolutely tremendous, made worse by the speed of the slowest merchant ship normally about 4 to 6 knots or 7 to 8 miles per hour. The journeys to Russia which finished Murmansk or Polyarno depending on the time of year as Murmansk was ice bound for 6 months of the year; sometimes going into Polyarno we had to break the ice and you could feel it pushing into the bulkhead of the ship.

I was based in Mess 10 which was down aft almost above the screws of the ship so there was plenty of noise and vibration when we were at sea. There were 15 of using the Mess, 14 seamen, and 1 Sick Berth Attendant. You were either on port or starboard watch and if you weren’t at Action Stations you were at Defence Stations which meant half of the crew were on duty and the other half cleaned the ship etc.

During the summer months it was light for 24 hours and in winter 24 hours of darkness when ice became a hazard because the weight of ice gathering could make the ship top heavy.

Murmansk had its share of bombings from the Luftwaffe after Germany attacked Russia. The Russians in Murmansk were not friendly towards us and always had their rifles at the ready. Whilst there we visited a cinema a couple of times but they were mainly showing propaganda films and, of course, everything was in Russian. There was no smoking and one or two were caught having a sly drag and were turfed out at gun point. Fortunately, we weren’t in port for long and then we were on our way home with an empty convoy. We were mostly attacked by U-Boats but also dive bombers in the summer months. When going to Russia we either sailed north or south of Jan Mayen island depending on weather, U-Boat activity or advice from the Admiralty regarding any movement of German battleships.

It was a very nervy time particularly as we were often faced with ships breaking down and had to stand by them to give U-Boat cover, often having to tow damaged ships and in very rough weather having to pull ships off rocks which had been blown there by heavy weather. I received money when I was demobbed for assisting with the salvage of a vessel on the rocks off the Faroe Islands. Every convoy lost some merchant shipping but some of the convoys were very large, as many as 35 merchant ships when good protection could be given by large cruisers and occasionally an aircraft carrier. This meant that we would be the crash boat running behind the aircraft carrier ready to save a pilot who might miss the proper landing position and landed in the sea.

On Christmas Day 1943 a message from the Admiralty confirmed the German battleship, Scharnhorst, was out of the fjord in Norway and on its way to attack the convoy. We were not with the convoy that day but were with Duke of York, the cruisers Belfast, Sheffield, and Norfolk trying to cut off the Scharnhorst’s route to the convoy. Eventually, all the battleships and the Germans sighted each other and together with ourselves started firing at one another. Also with us was the cruiser Jamaica and the destroyers Matchless, Musketeer, Virago, and Opportune. We, the Saumerez, Savage, Stord and Scorpion all attacked with torpedoes and all the time the 4.7 guns of the Scorpion were firing at the German battleship. Saumerez was badly hit and the Duke of York was also hit but eventually the Scharnhorst went down and although there were hundreds in the water we only managed to pick up 26 Germans, 10 more were picked up by Musketeer and that was all from a ship’s crew of 1900. Our skipper Captain Clouston got a DSC and there were a few Mentions in Despatches dished out. When we returned to Scapa Flow everybody on ships in the harbour was cheering and eventually the King came and reviewed the ships concerned and told us to ‘Splice the Mainbrace!’so we all got an extra tot of rum!

And the convoys continued and the attacks from U-Boats became greater, some of the weather we faced was unbelievable. We once came back with practically nothing on the upper deck surviving and all our lifeboats were washed overboard. We were withdrawn from the convoys 2 months before D-Day and did a few sorties in the English Channel fighting E-Boats every night. On the night before D-Day, we set off from Portsmouth and we found ourselves escorting several minesweepers who were sweeping a channel for the ships that carried the soldiers to Normandy.”

Bill then goes on to describe his experiences on D-Day after which the Scorpion departed for its last convoy from Scapa.

“This was one of the biggest convoys to Murmansk and a very busy one as I think all the German subs congregated up there and again a few ships were sunk but we made it and returned with an empty convoy. We then left Scapa for good and proceeded to Devonport where we flew ’Paying off the Pennant’ and handed the ship over to the Dutch. I was one of the one of the few left aboard to guide the young Dutch sailors in the working of the ship. The Scorpion was then renamed the Kemperfeldt and we left her and went back to barracks at HMS Drake.”

Photo: Bill manning the guns, a claustrophobic experience as the lid was screwed down so he couldn’t get out till he was let out.

Sadly, Bill passed away just before receiving his Ushakov medal.