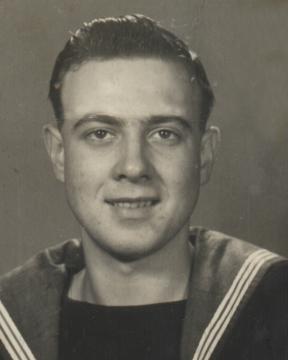 “I tried to join when I was 16, I thought it’d be exciting, but they wouldn’t accept me so I went back after a few months when I was 17. A couple of us went from Bolton to join up and they asked us what we wanted to do.”

“The other lad, Charlie Aspinall, said a stoker, but I said I wanted to be up top, a seaman. He died when he was 19, he was on a cruiser called the Charybdis, which was torpedoed.”

The 87-year-old great grandfather, of Tonge Moor Road, served aboard the Captain class frigate HMS Cook, formerly the USS Dempsey, an American ship built at the Boston Navy Yards and loaned to the Royal Navy.

He said: “It even had an ice cream machine onboard, but we never got any. I would be in the crow’s nest keeping lookout.

When we were escorting ships in the Atlantic they’d be spread out so far you couldn’t see the end, and one funny thing is that our ships were commanded from the HMS Dido, which was Bolton’s adopted ship.”

The Cook was later assigned to Arctic convoy duty, with Royal Navy ships escorting supply vessels to the Soviet ports of Murmansk and Archangel. Mr Jerstice said: “We’d set sail from Loch Ewe in Scotland. It was deadly cold, I never saw an iceberg, it was too cold for icebergs to break off, and one big problem was the northern lights because it meant the U-Boat commanders could see you through the periscope.”

“Then you’d just hear “boom” and see a shoot of flame. The ships were all arranged in lanes and we had an ocean going tug, which would pick up survivors and it would move between the lanes. But you couldn’t last very long in the water because it was so cold.”

He added: “It wasn’t just the journey there but the journey back that was dangerous. You had to get out of the bay of Murmansk and there was another escort ship behind us once and it got torpedoed. The U-Boats would even follow us and attack us in the Irish Sea.”