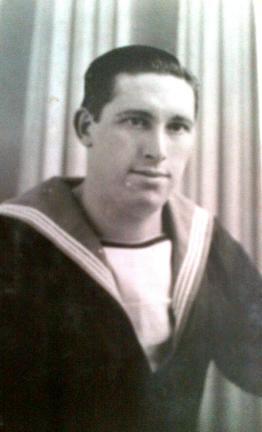 Below are links to two excellent interviews with WWII veteran Bob Cowan.

Interview 1 – Bob talks about his memories and experience of war at sea during WWII. He talks about the sinking of his ship, HMS Mashona, the Arctic Convoys, the Malta convoys (on HMS Ashanti), the war in the Far East on HMS Swiftsure and passing through Hiroshima just after the atom bomb was dropped.

Interview 2 – Granada Reports interviews Bob Cowan following a campaign by Chorlton Good Neighbours to get the UK government to allow him to receive a Russian medal in recognition of his wartime service.

Bob Cowan is soon to be 93 years old. He was born in Mos Side, Manchester. Here he talks about his memories and experience of war at sea during WWII. View the interview on Youtube HERE

Photo – Bob Cowan (4th from the right) with shipmates