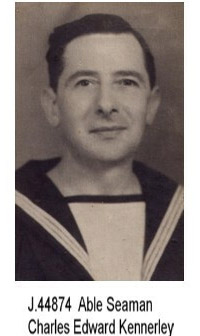 Written by Ron Kennerley ( his son)

J.44874 Able Seaman Charles Edward Kennerley joined the Royal Navy in 1915 as a Boy Entrant and served on HMS Conqueror in WW 1. When he was 18 he signed on for a further 12 years. Following a world tour in HMS Durban lasting from 1926 to 1929 he was discharged to the Fleet Reserve.

With WW 2 imminent in 1939 he was recalled and joined the destroyer HMS Griffin – serving in the North Sea and various Mediterranean campaigns until 1942 when he joined the minesweeper HMS Bramble. This ship took part in Arctic Convoys PQ15 – QP12 – PQ16 – QP13 – PQ17 – QP14 – and JW51b.

On the 31st.December 1942 the Bramble was sunk by the German ships Admiral Hipper and Eckholdt with the loss of all hands. Thirteen days later his eldest son (my eldest brother) Flying Officer Charles Geoffrey Kennerley was killed whilst flying a Hawker Typhoon over the south of England.

The photos include (i)4 of the ships he served on. (ii) A memorial stone laid at the Loch Ewe Memorial during a visit in 2018. (iii) Father and Son together on leave at home a few weeks before they died.