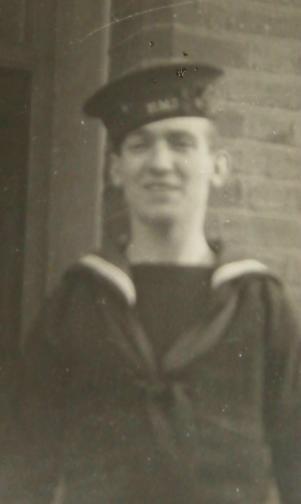 On 24th February this year (2012) my father ‘checked out’. He was 88 and the past few years had been troublesome, health wise, but his spirit was still good and he could still make us laugh.

My Dad was Charles Thomas Collis born in Richmond, Surrey in 1923, the second of two sons.

His father died when my dad was 11, so staying on at school was not an option for him. He really wanted to be a carpenter but, since the local pawnbroker needed an apprentice, his headmaster pushed him forward so money would be brought in to help the family.

In 1942, when dad was 19, he was enlisted into the Royal Navy. According to his Certificate of Service record my father spent his war in the relative safety at shore based locations:

However, through extensive research I have found that he was, in fact, sent almost all over the world, from America to Australia and from India to Gibralter.

My father was a proud member of DEMS (Defensively Equipped Merchant Ship) organisation and, from his own writings, he states the following:

“The DEMS rating, proud as he was, found that he was an unknown factor except amonst his Band of Brother’s The general service (Royal Navy) did not disown him for they just did not know about him and, even to this day, the cry is DEMS? What’s DEMS?”

Everybody had to sign on the ships articles, the gun crews signing on as ‘deck hands’. As such they were paid the princely sum of 6d (2 1/2 pence) per day / 3/6p (17 1/5 pence) per week. This being the lowest wage, short of nothing at all, that anyone could be paid. All ranks in the DEMS were classed as acting and, at the cessation of hostilities, the DEMS just ceased to exist. The ratings were either released or re-joined the Royal Navy at a lower rank.

Some of the vessels that my father served on include; SS Fort Rampart (7,134 tonnes) British steam Merchant ship sunk on it’s maiden voyage whilst in convoy with the American tanker G Harrison Smith in 1943.

At 07:47 and 07:49 hours on 17th April 1043, U-628 (Hasenschar) fired torpedoes at the convoy HX-233 and observed one hit on each of two ships. In fact the Fort Rampart was damaged and the American steam tanker Harrison Smith was missed. At 11:30 hours that same day U-628 hit the straggling Fort Rampart with a coup de grace but the vessel did not sink until 03:26 hours on 18th April when U-226 finally sank the ship about 900 miles east-northeast of the Azores with a coup de grace and gunfire. The Fort Rampart (Master William Henry Stein) was on her maiden voyage. Six crew memebrs were lsot. The master, 40 crew members, six gunners and three passengers (DBS) were picked up by the HMCS Arvida (K113 Lt D G King) and landed at Greenock.

My Dad was torpedoed on another two occassions which inspired my grandmother to comment “Charlie, they won’t want you back. You’re always on ships that are targetted”.

SS Bosworth (6,661 tonnes) steam Merchant ship, eventually sunk as a blocksip (2nd Sept 1944) to act as part of the defence to the Mulberry harbours at Normandy

HMS Penn, P class Fleet Destroyer He joined too late to be associated with HMS Penn’s Operation Pedestal, a convoy to bring much needed resources to Malta, but he certainly was on later convoys to Malta.

On discharge from the Royal Navy (26th April 1946), dad left with £53,9s.0d and returned to the pawnbroker & jewellery trade.. although he never really did take to the job! He married my mum on 17th February 1944 and initially they live in Shephers Bush until, in 1959, they moved to Staines, Middlesex.

He never forgot his time in the Royal Navy and many years later established the DEMS at Hanworth Navy Club, Hanworth, Middlesex. As chairman he welcomed other DEMS to the club and also visited, to keep the organisation going. However, with passing years, the time came to disband. But these men must never be forgotten.

With my mum they travelled the world so he could show her all the places he had visited during his ‘Navy Days’. they even went back to Australia in 2002 when he was 78.

My Dad was My Hero, he was my best friend and he was so proud that my son joined the Royal Navy as a submariner five years ago.

The reason I am so interested in Denis, is I was named after him. My Father never forgot Denis and in turn I wish to have a small memorial for my name sake. As he was an Orphan I am maybe the only person left to remember Denis.