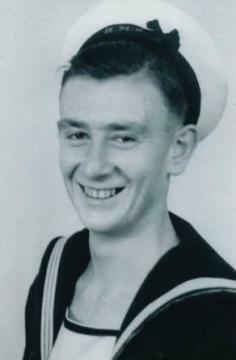 Colin’s service began with the Royal New Zealand Navy in 1943. After training on minesweepers he volunteered for overseas service. His Royal Navy service was as a gunnery rating on the Z-class destroyer HMS Zealous, serving under Commander Richard Jessell.

His first convoy was JW64 which departed for Murmansk in February 1945. On arrival they were despatched on a secret mission with HMCS Sioux, HMS Zambesi and HMS Zest to evacuate Norwegians hiding out on Soroy Island, which was under German attack. The little known operation called “Operation Open Door” was one of the most extraordinary rescues of the war. He remembered the day vividly.

“Norwegian resistance fighters fired flares and all these people came running and skiing down the mountains to the ships. They were ordered to be scrubbed when they came on board. So we set up baths on the deck. There were women naked on the deck but no-one took any notice. Everyone was given new clothes and their old ones thrown overboard.”

Colin also witnessed the destruction of the corvette HMS Bluebell torpedoed outside the Kola Inlet as the return convoy RA64 headed for home. “One minute it was on the surface, the next minute it blew up. There was nothing there.”

It was a nightmare voyage. The convoy was hit by the worst storm recorded in the Barents Sea during the war. Hurricane force winds and mountainous seas pounded the ships. Merchant and navy ships were rolling 45 degrees and many were damaged.

Later that year Zealous took part in an attack on a German convoy during a mine laying operation off the Norwegian coast. One German ship was sunk and another damaged.

“One of the destroyers fired a star shell and lit up the enemy ships. We could see German crews running to their guns.”

Colin was on board Zealous as it took part in the escort screen for the second to last convoy of the war, JW66. It returned to Clyde on May 8, 1945, the day Germany surrendered.

Zealous was despatched to Copenhagan with the Home Fleet ships to take the surrender of the Kreigsmarine fleet, including the heavy cruiser, Prinz Eugen, which had taken part in the attack which sunk HMS Hood. Colin recalls many of the German sailors lining the decks turned their backs as they sailed into port.

After the war Zealous was sold to Israel. Renamed INS Eilat she was sunk by Egyptian missiles in 1948, the first ship in history to be sunk in a missile attack. Forty-seven Israeli sailors lost their lives.

Reminiscing about his service Colin said he had the utmost respect for all those who served on the convoys.

“Both the merchantmen and the navy, they all did a fantastic job.”