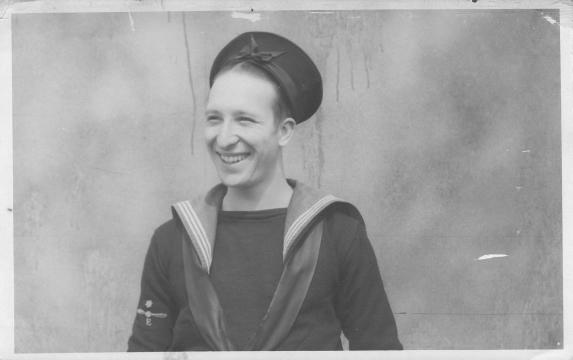 written by and photos from Steve Moss (son)

My Dad, Cyril Moss, enlisted in May 1941 at the age of 19 and attended the recruitment camp at HMS Royal Arthur in Skegness.

He was on what appears to be training duties for the next year at a variety of Naval Air Stations and Shore establishments such as: HMS Daedalus, HMS Medina and HMS Jackdaw. He went off to Pascagoula in Mississippi in the USA to await the conversion of a US merchant ship to HMS Chaser.

He then joined an Atlantic Convoy in May/June 1943 and sailed to Scotland where he met up with the Arctic Convoys. He was on active duty with HMS Chaser from 1943 to 1945.

Judging by the information I have been able to obtain on Chaser, he would have been in and out of Loch Ewe, Scapa Flow and Rosyth when sailing to and from Kola Bay on trips to Murmansk and Archangel.

He died in 1988 but always talked fondly about the camaraderie both on board and on shore. I know that if it was not for the death of his father in October 1945, he would have tried to remain with HMS Chaser and gone to the Pacific with her.